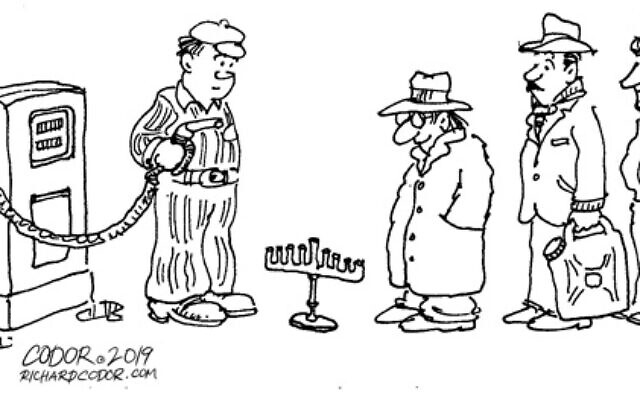 I made Hanukkah cards from some of the drawings of the noted Jewish cartoonist, Richard “Dick” Codor, a close friend.

On Dec. 26, 1891 in Atlanta, there was a Hanukka Ball at the Concordia Club, which was planned by the Players’ Club, a youth organization made up of children of members of The Temple. The historian of Atlanta Jewry, Steven Herzberg, pointed out that the younger Haases, Riches, Cohens, Rosenfelds and Seligs were some of the youth who did the planning. We do not have details, but we are sure the young Atlanta Jews had a very good time.

Let us move to the western part of the United States at the end of the 19th century. We are informed by a daily San Francisco newspaper on the 26th of December 1897, that a Hanukka celebration was held that day at the Bush Street Temple. The children performed intricate marches carrying the American flag. Following that there were recitations about Hanukka, Judah Maccabee and the miracle of the oil burning for eight days. “Many candelabra were lit as the prayers were recited.”

Now Rabbi Isidore Myers spoke to those assembled, young and old. “To be regarded with favor by G-d, you must show how much you can do to spread the truth. Show your pride,” he continued, “to your noble ancestors by your own heroism, remembering that the true hero is the one who does G-d’s will. Let us follow the example of the noted Judah Maccabee.”

The Hanukka celebration ended that day with everyone, old and young, singing the anthem “America.” It is fascinating how in various periods when the USA was at war, Jews emphasized their patriotism for their nation. The Jewish people, about 2 million then living in United States, demonstrated how much they loved America. In this case, embattled America was fighting in the Spanish-American War, where Jews were serving as well.

Professor Andrew Heinze wrote a very important book, “Adapting to Abundance.” It is a fascinating study that documented how the observance of Pesach, Sukkot and Chanukah in the early 20th century was strengthened because these three holidays adapted to the commercial culture of American holidays at that time. In the case of Hanukka, the observance grew to be a massive gift-giving event. However, in that period, the traditional element was not forgotten.

“A view of the Lower East Side in the 1890s,” Heinze wrote, “showed that Hanukka had survived the shocks of immigration. During that time, passengers on the Second Avenue ‘EL’ train heading down toward 1st Street in the darkness of a December evening were struck by the rows of burning candles that illuminated the windows of tenement house after tenement house.”

The Hanukka gift ritual, though traditional as we know, took on enormous proportions. A hundred years ago in the USA, Heinze showed that Jews, proportionally. surpassed the well-known gifts practice of the Christmas season. Heinze explains further that a century ago, Passover became the time when all the old furniture was piled on the curb and new furniture, in large quantities, was purchased. Buying to the hilt was emphasized in the Yiddish newspapers as the American rebirth of a freed Jewish people.

The main objects used on Hanukka, menorot and dreidels, were in demand by the growing number of American Jews. Jacob Schiff, a leading figure in developing financial security for immigrants, underwrote factories for them where they could work in the 1920s. They were mostly in New York, where Hanukka menorot, dreidels, Passover seder plates and candlesticks were made on assembly lines. No work done on Shabbat.

I possess a Hanukka menorah fashioned by the hands of those newly arrived Jews. My grandfather, HaRav Tuvia Geffen (z’l), either bought it or it was given to him as a gift. My father inherited it, and he left it to me. That menorah has continued to glow on Hanukka for almost 100 years.

My other grandfather, Cathriel Birshtein (z’l) of Norfolk, who made furniture, carved dreidel molds out of wood, then he poured hot lead into them and dreidels appeared. His children used them in the 20s, my mother especially, as they were growing up in Norfolk. I possess a few of those lead spinning Hanukka tops.

Professor Jessica Josselit, in her study of American Jewish holidays 1880-1950, provided us with a description of a 1950s period piece, the oversized dreidel known as the Maccabee. “Made of laminated plastic and standing four feet tall, the Maccabee, touted its creators, the Dra-Dell Cooperation of North Bergen, New Jersey, ‘expresses a true holiday spirit in the home where modern children may share the wonder of Hanukka.’” In the photograph, showing its use, the children are sitting around the Maccabee with presents stacked up under this decorated top.

Perhaps the Lubavitcher Rebbe (z’l) was the first to think about the display of the Hanukka menorah in a community site, where Christmas creches had always existed. However, that public menorah placement was preceded in fact in American military bases all over the world.

I, as a chaplain, and American Jews, in general, are proud that the military high command at the Pentagon has encouraged Jews since the Civil War to observe their holidays while serving in the U.S. armed forces. Before I reached my base in Fort Sill, Okla., as a chaplain in 1965, our post already had a wonderful way to mark the Hanukka holiday. A large menorah had been crafted out of wood several years earlier with nine sockets for the electric bulb lights. In addition, on one side next to the bulbs, a Judah Maccabee figure had been painted. On the other side we could see Antiochus in his armor. Both had swords in their hands.

Each night of Hanukka, we recited the blessings outside and screwed in the bulb for that night, adding it to the other ones all aglow. Of course, we could not light the other bulbs with “our shamash,” which always shone brightly in the middle of the giant menorah. About 20 soldiers were there each night with some Christian chaplains and a few Jewish civilians from Lawton, a nearby town.

On the Sunday of Hanukka, a wonderful latke party was held at the well-adorned Officers’ Club. Hundred-pound bags of potatoes were sent over by the quartermaster. The highest-ranking Jewish officer on the post, the late full bird colonel Jack Wolfson (z’l), put his apron on, then pan-fried latkes for almost an hour. Soldiers volunteered to peel the potatoes; others took the hot latkes, when they were ready, and served.

The celebration was a big hit, with over 150 soldiers, Jewish civilians and chaplains attending. The National Jewish Welfare Board Ladies Auxiliary from New York sent toys for the children, chocolate Hanukka gelt for everyone and other small gifts. The children attending were from families who lived in Lawton, Ardmore, Anadarko and a small SAC [Strategic Air Command] air force base nearby. A lot of “Jewish Okies” were present.

The noted collector, who assembled and resurrected the massive works of Arthur Szyk, thereby bringing them back for all to enjoy, is Rabbi Irvin Ungar. He has curated exhibits of Szyk around the world. They portray the artist’s deep Jewish commitment and his American patriotism. In the 1930s, before Szyk moved from Poland to the USA, he created a handy item that any of us or our children could use. He designed a set of playing cards with newly drawn pictures of the leaders of the Jewish people, heroes all. On one of the playing cards is Judah Maccabee.

The sets of cards initially printed in the 30s had all been lost. A few years ago, Ungar found some and decided to print them again. The “Judah Maccabee” card, shown here, possesses, in his facial expression, determination. As we play with the deck, which is available for sale, we feel the monumental victory, which Judah Maccabee oversaw as our people of old were led to freedom.

The late Lubavitcher Rebbe, Menachem Schneerson (z’l), is recalled in many different ways.

Personally, I feel that each giant electric menorah, shining brightly in a central public space of every major city in the USA, is an inspiring memorial to him. Through these, our holiday infuses the atmosphere of America with our continuing call of freedom for all. In Israel, we take for granted giant menorot on city centers, buildings and the like. In America, Chabad fought a legal battle to insure their placement “front and center.” It has worked and lights up all of our hearts.

Richard “Dick” Codor, a native of Delaware, lives and works in New York. He has become one of the leading Jewish comic artists and created many notable drawings for Hadassah. He produced an illuminated book for children on Hanukka. His “Bird of Peace,” drawn in 1978 when Begin and Sadat won the Noble Prize, was kindly executed since he added Jimmy Carter. The “Bird of Peace” drawing was first seen on the Israeli Arabic channel, where Codor was working. T-shirts were made and distributed at the Nobel Prize ceremonies. 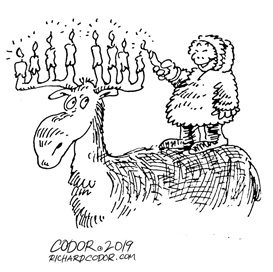 Because we are very close friends, he permitted me to print envelopes with the “Bird of Peace.” I put on stamps and had them cancelled. Since it was a way of making money, I sold them in front of the main post office on Jaffa Road. How does all of this stretch out to Hanukka?

I suggested to Dick that he draw menorot of different types for Hanukka. We used those to make Hanukka cards. The most noted were the Hanukka menorot on the back of a reindeer. Quite a number of cards were sold, but only collectors have them now.

Here in Israel, where he lived for 10 years, 1971 to 1981, Dick drew a poster of Popeye Moshe Dayan and, the most famous one, Super-Golda. Just for fun, he caught the spirit of the Four Sons, portraying them as the Marx brothers. Keeping Groucho and his siblings in his computer, Dick created “Richard Codor’s Joyous Haggadah,” which has sold very well through the years.

We have many ways to observe Hanukka, and the Codor menorot will make us all smile.

David Geffen is an Atlanta native and Conservative rabbi living in Jerusalem.