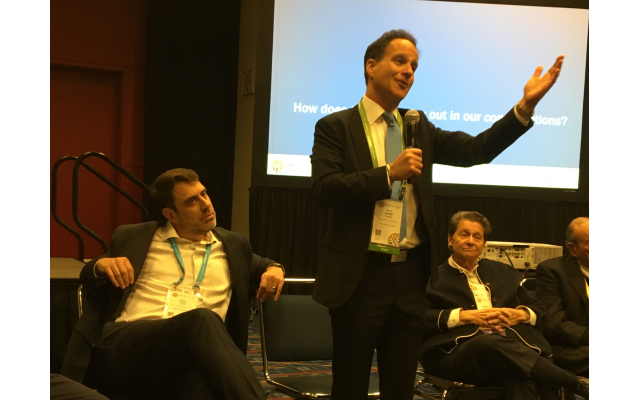 The conversation in Chicago with Reform conservatives was led by Rabbi Jonah Pesner, director of the URJ’s Religious Action Center. Seated is Rabbi Peter Berg of The Temple in Atlanta.

Rabbi Peter Berg, senior rabbi of The Temple in Atlanta, was among a group of leading figures in the Reform movement who participated in what was called “A Conversation for Politically Conservative Reform Jews.”

The program was an attempt to answer criticisms by some with conservative political views that their opinions don’t count when the URJ takes social and political stands that are controversial.

Rabbi Berg’s synagogue has a long history of involvement in liberal civic and political issues in Atlanta. He admits he frequently wrestles with how to present difficult issues so that everyone has a say.

Representatives of congregations from states such as Wisconsin, Texas and West Virginia were critical during the program of how decisions are made at the national level. One delegate from the Midwest expressed his deep frustration with the Reform leadership and said it is too far to the left even for many Democrats.

Some support for those criticisms came from Rabbi Jeffrey Salkin, a Reform religious leader with strong liberal credentials, who also attended the discussion over the political direction of the URJ.

In 2016 he was among a group of Jewish religious leaders who staged a walkout when Donald Trump spoke at the annual AIPAC meeting during the national election campaign.

Yet Salkin, who was a rabbi in Atlanta and Columbus, Ga., and is now at Temple Solel in Hollywood, Fla., backed up some of the comments made by conservative Reform leaders.

“The URJ has never made a political pronouncement or a pronouncement on a public issue that deviates very far from the center left of the Democratic party,” he said. “We tout ourselves as a movement of what we call ‘audacious hospitality’ but our Republican members do not always experience it that way.”

In fact, when the Religious Action Center of Reform Judaism held its annual meeting in Washington this summer, it was described by the Jewish Telegraphic Agency as “a Democratic lovefest.”

The only Republican to speak at the RAC meeting was Paul Teller, a special assistant to President Donald Trump for legislative affairs. He was introduced by Rabbi Ron Segal, senior rabbi of Temple Sinai in Sandy Springs, who is also the president of the Central Conference of American Rabbis. Segal urged attendees to work toward a measure of understanding with members of both political parties.

“It is essential we celebrate a diversity of views and never forget that value,” Rabbi Segal said at the meeting, according to the JTA. “We remain firmly nonpartisan and we seek opportunities to work together on issues of common concern with all elected officials regardless of political party.”

That was also the message that Rabbi Rick Jacobs, the president of the URJ, brought to the Chicago convention last month. 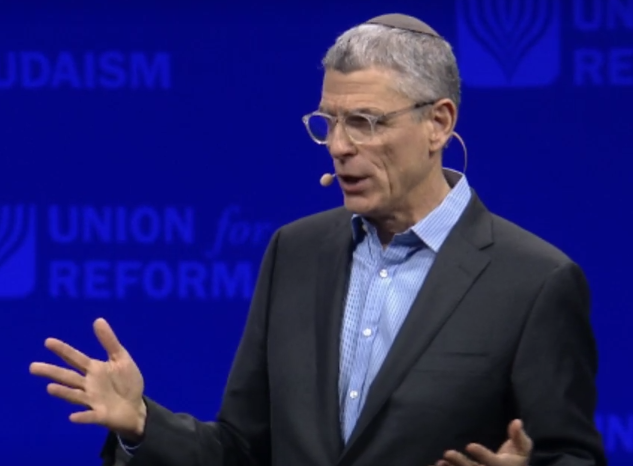 In his keynote address, Rabbi Rick Jacobs, president of the URJ, sought to cool the rhetoric between Reform’s conservatives and liberals.

“Respecting a range of political opinion is as important as accepting diverse views of G-d and Jewish life,” he said in his keynote address. “Some of our congregations are so polarized that big issues are not discussed for fear of further splintering our already deeply divided communities.”

Among the workshops at the convention was a three-hour program by communication consultants from a group called Resetting the Table. The program for Reform leaders, in a room filled to capacity, was described as “Building A Culture of Dialogue Across Differences.”

The program was similar to one held four years ago in Atlanta by the same group for the Jewish Community Relations Council. It won a national award for the JCRC. The program in Atlanta and the program in Chicago last month were led by Rabbi Melissa Weintraub, co-founding executive director of Resetting the Table.
“In many communities, either those who lean left or those who lean right or more conservative feel disenfranchised and marginalized. It’s like there is no room for multiple voices,” Jacobs said.

Still, the RAC is firmly committed to beginning an ambitious nonpartisan civic engagement campaign in this election year. The program, which begins this month, is an ambitious national campaign to get out the vote.

Rabbi Berg is optimistic about the future. After the meeting with conservative Reform representatives was over, he seemed hopeful about what was next for the Reform movement.

“We are a strong cohesive movement,” he said. “We are bound together by Reform tradition, theology and a belief that it sometimes is OK to disagree.”