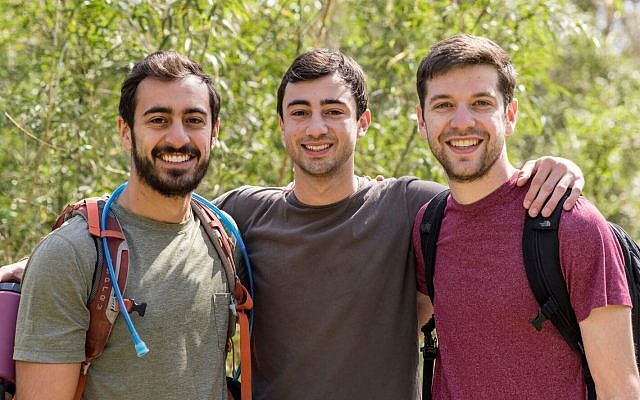 Aiming to innovate in a market that hasn’t changed much in decades, three Jewish friends and fraternity brothers set out to reinvent the water bottle.

“I had a Nalgene that was full of water and every step I took for miles it was banging up against my leg,” Barak Zitron said of the hike that spurred his innovation. “I was so frustrated with why there wasn’t just one other point on the bottle to clip it in place. It’s a rigid, single-purpose container, and I thought I could improve on it.”

The project, called MODL, aimed to redefine what a water bottle could do, by replacing hard walls with a dishwasher-safe, collapsible silicon design with multi-purpose head attachments, such as purifiers or a shower head for camping.

As of April, the three recent University of Georgia graduates — Zitron, Justin Guld and Zack Leitz – had just launched the MODL Kickstarter — a crowdfunding campaign. They spoke to the AJT just over a week into the process and had, at the time, raised $35,000.

That number, however, was far surpassed during the remainder of the project, ultimately raising $133,163 on Kickstarter and another $8,079 on Indiegogo, another crowdfunding site.

After wrapping up the project, production was into full gear as the trio worked to produce bottles for their backers. Knowing that manufacturing was an area in which they lacked experience, they consulted with experts who could provide guidance, and Leitz spent time in Asia, working with the manufacturer directly.
December was an exciting month for the new entrepreneurs.

“We just wrapped up packaging everything and it was shipped on Friday,” Guld said, calling 2019, “a beautiful adventure. A lot of diving into the unknown, but also a lot of discovery because of that.”

As for what the future holds for MODL and its three founders, sales are just beginning on their website, with the bottle and four “MODs” listed for $125 at modloutdoors.com.

“We’re taking this to the world and now we get to hear from our customers on how they use MODL and we’re going to keep innovating on it from there,” Guld said.