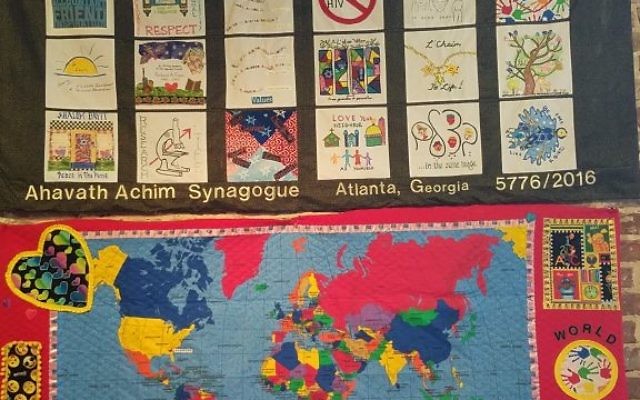 Ahavath Achim Synagogue has a longtime connection to the AIDS Memorial Quilt, including this panel.

By the end of February 2020, the AIDS Memorial Quilt – with threads that tie it to the Jewish community – will have left Atlanta after 18 years and returned to San Francisco, where it originated in 1987.

The AJT reported in November that the quilt will be moving to the AIDS Memorial Grove in Golden Gate Park, and its archive transferred to the Library of Congress in Washington, D.C.

There are more than 105,000 lives memorialized in the quilt. The quilt is made up of more than 50,000 panels, each 3-foot-by-6-foot, the size of a grave. The quilt weighs some 55 tons and if displayed in full would cover 1.3 million square feet.

The quilt moved to Atlanta in 2001 from San Francisco at a time when it was imperiled by financial issues. “What Atlanta really did, Atlanta gave it a home and started programs that had not been done,” said Leslie Gordon, executive director of Atlanta’s William Breman Jewish Heritage Museum and a former member of the NAMES Project board. “We were a holding place for something very precious to a community and we allowed it to be spread to an even larger community.”

There is no count of the number of Jewish lives remembered in the quilt, but the first name stitched into its fabric was of a Jewish man. “The AIDS Memorial Quilt is a yahrzeit memorial itself: It is dedicated to the memory of Marvin Feldman, who was the best friend of quilt founder Cleve Jones,” Robbie Medwed wrote in a 2017 AJT article.

“Names are really important in Judaism,” said Rabbi Laurence Rosenthal of Ahavath Achim Synagogue. “Names connect us to heritage. Names contain personality traits and part of our loved-one’s soul, which is why we name people after people we love and care(d) for. When you stand in front of a quilt block, it is striking how personality and those beautiful qualities of a soul come out through the fabric.” One of the lives memorialized is that of Michael Shure, a member of Ahavath Achim.

Billy Planer estimated that during the past 15 years, as part of his Etgar 36 civil rights tours of the South, he has brought 23,000 people to the NAMES Project, with 90 percent of the groups coming from Jewish communities from throughout the country.

“They find the gentleness and humanity of the quilt so powerful. The ability to find a connection, even if you don’t know anyone affected by the disease, because you will see a panel made for someone from your town or who shares an interest with you, is powerful, so that they now have a connection to this disease,” said Planer, a member of the NAMES Project board.

Two of the names in the quilt, those of Gary Piccola and Robert Needle, remember co-founders of Congregation Bet Haverim.

Rabbi Joshua Lesser, now in his 20th year at Bet Haverim, first encountered the quilt as a “newly out” 21-year-old living in New Orleans. “The ultimate goal is for the quilt to have its maximal impact, and if that means leaving Atlanta, then I hope we are able to let go with honor and appreciation for all that [NAMES Project president and CEO] Julie Rhoad and the NAMES Project staff and board have done to be such good stewards. It will be sad on a local level, but I believe that things change and take different form, and if it is for a greater good, then we say farewell and look forward to the next part of the quilt’s historic journey,” Lesser said.