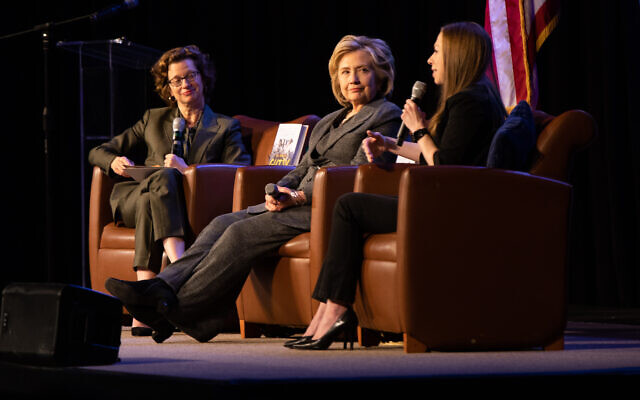 Photo by Eddie Samuels // Michelle Nunn, who leads CARE USA and ran for U.S. Senate in 2014, interviews the Clintons about their book and lives.

The 28th annual Book Festival of the MJCCA hosted some of its largest crowds this year, with a final count of 12,000 in attendance during the two-week event. The 36 events and 50 authors, ranging from politicians and sports figures to Holocaust survivors and major achievers, included former first lady and presidential candidate Hillary Clinton and her daughter, Chelsea, former U.S. Ambassador to the U.N. Nikki Haley and actor and author Henry Winkler.

“The festival went extremely well, and overall, we were very pleased with attendance,” festival director Pam Morton recently told the AJT. “Although Henry Winkler had to cancel for opening night due to the wildfires in Los Angeles, we were fortunate that he and his co-author, Lin Oliver, were able to rearrange their busy schedules and reschedule.”

Among the subjects explored at the festival were Israel, the Holocaust, music, pop culture, food, politics and stories of resilience and overcoming adversity.

The full MJCCA book festival team hadn’t debriefed since the festival, which ran from Oct. 30 to Nov. 18, but Morton said “I’m happy to say that there wasn’t a lot we felt went awry. Our major logistical issue that we face each year is parking, but under the incredible organization and direction of our security team, led by Security Director Karl Hydrick, the majority of the feedback we received was extremely positive.”

Already confirmed for the 2020 A Page From the Book Festival are:

John Carreyrou, “Bad Blood: Secrets and Lies in a Silicon Valley Startup,” 7:30 p.m. Feb. 4, and Steve Madden of “The Cobbler: How I Disrupted an Industry, Fell From Grace, and Came Back Stronger Than Ever” at 7:30 p.m. May 14.