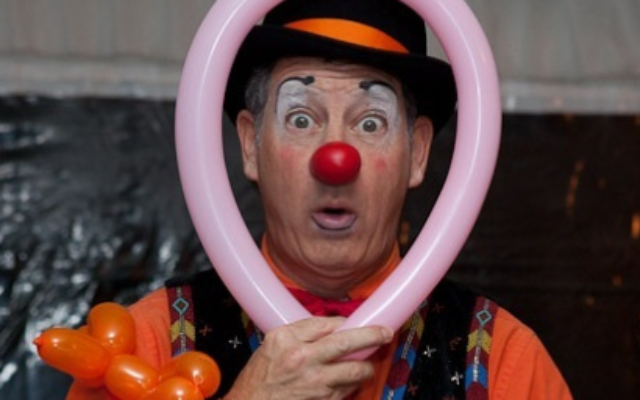 When Reuben Haller moved to Atlanta in 1994, he had no idea he would end up dedicated to clowning as an art form. Known as Ruby the Clown, Haller was a teacher 22 years ago who didn’t know what he wanted to do with his life. He ended up going to Atlanta’s circus camp.

When he was asked if he wanted to be a clown, Haller responded that he didn’t know anything about being a clown, but the owner encouraged him to just try it. “When I put on a clown nose the angels sang and that was my destiny,” he said. “I felt this freedom and power and it was magic.”

With years of experience working with children and families, Haller is looking forward to entertaining guests at the Atlanta Jewish Life Festival. “You’ll recognize me because I’ll be dressed differently than everyone else,” he said, laughing. 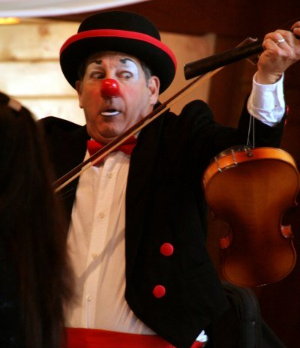 Reuben Haller is an entertainer, musician and clown.

Three years after he became a clown, in 1997, Haller was hired by New York’s Big Apple Circus to be a hospital clown. “Oh, that was just the best thing ever,” he said. “I’m still a hospital clown, in my 20th year of doing that. I call it ‘essential clowning’ for children and family and staff.”

Haller now works at Children’s Healthcare of Atlanta hospitals. He is part of a company called Humorology Atlanta, stylized as HA!, which does “essential clowning” for children who are sick or injured and their families. Haller is the site supervisor for HA! At Egleston, a CHOA hospital.

Haller sees clowning as a very human art form that reflects human flaws back to people in a humorous way. “We highlight foibles in the human character that everyone has, but everyone tries so hard to hide. But clowns make their own foibles glaringly obvious. I’ve never used the word foibles so many times in one sentence.” 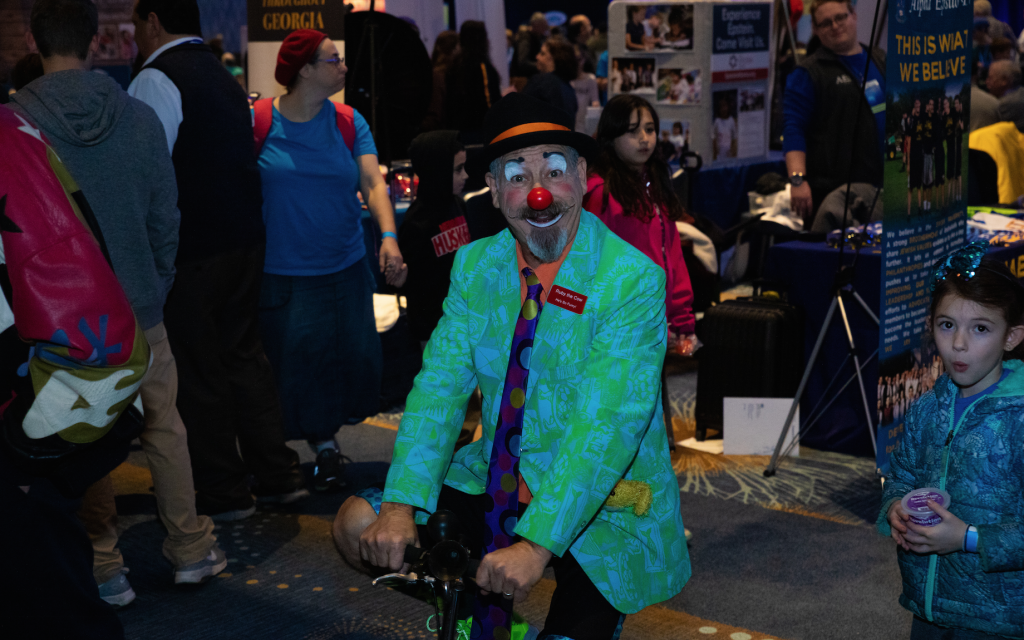 Photo by Eddie Samuels // Ruby the Clown is among the roving entertainers.

Clowning is full of its own surprises. Haller described a time he was in a pavilion full of tables. As part of strolling entertainment, he makes sure to carry props around with him. He took out a small toy duck to make a joke about pressed duck. “I put the duck down on the table and pressed down on the duck and the whole table collapsed!” he said.

Mishaps aside, his clowning career has been replete with fulfilling opportunities. “I had the great and good fortune to do some special events for Cirque du Soleil, and throwing three dozen enormous beach balls off the World of Coke museum was a lot of fun,” Haller said, remembering his involvement with the museum’s grand opening.

Along with clowning, Haller is a musician, entertainer and artist. He creates visual art, including a series of Hebrew calligraphy that comprised of Hebrew words and phrases surrounded by scenes or intricate designs. 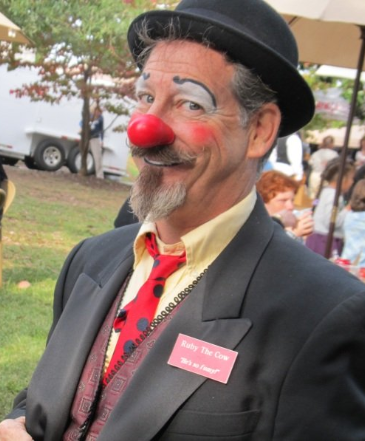 When Haller first put on a clown nose, he felt it was destiny.

Originally from San Francisco, Haller was a student Zionist activist at San Francisco State University. He was also an activist in the 1980s for Soviet Jews who opposed the Soviet government and weren’t allowed to emigrate. “Among many other protests I helped organize, I did a 21-day hunger strike for refuseniks.”

Haller is now very involved in the Atlanta Jewish community. He is a member of the band at Congregation Bet Haverim and also leads children’s High Holy Day services there. His wife, McKenzie Wren, is a past president of the synagogue and is still involved with the board.

Haller views his work clowning as satisfying some intrinsic human experience, challenging artists to make artistic decisions that connect with their audience on a deeper level. “Clowns deal with the real world. We don’t have set scripts. We just respond to people in as honest and stupid a way that we can,” Haller said, adding that clowning is basically improvisation.

“Clowns find great delight in life and great frustration with life. Clowns magnify what everyone goes through so people can look at a clown and laugh at themselves as they’re laughing at a clown. We all stumble; we all fall. Clowns do those things all the time. We recognize our own humanity in clowns.”