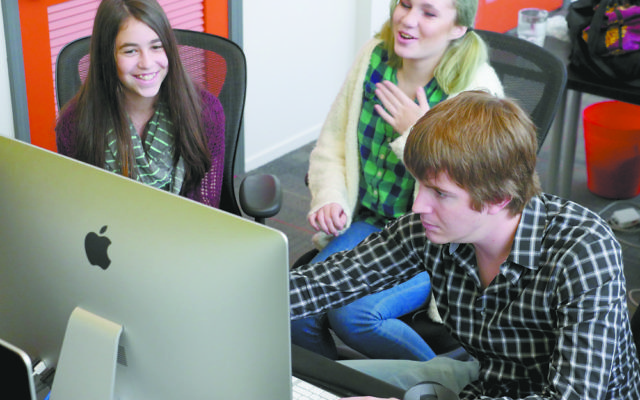 Maddi Barnard, 14, and Charli Shapiro, 13, together produced a short film, “In Our Eyes,” which had its world premiere at the Atlanta Jewish Film Festival.

Just less than three minutes in length, the film was a byproduct of Camp Flix at Emory University. It was produced and shot at the campus chapel.

Camp Flix teaches screenwriting, directing, sound and lighting to students ages 11 to 17 over one week. Current filmmakers and industry professionals visit to teach mechanics and form. The camp this summer has sessions June 12 to 17 and July 17 to 22 at Emory and July 10 to 15 at Oglethorpe University.

Campers produce a short film by week’s end by working in small groups. 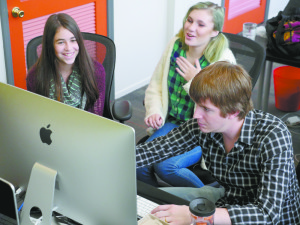 The overnight campers work all day on films; at night they have the option of additional projects. One evening, Charli found herself with an idea but no group to work with. She and Maddi met for the first time, explored concepts and brainstormed. Soon they were recruiting other campers, and two Jewish counselors fell into place.

“One night a counselor pulled us over and said, ‘Here’s your group.’ Maddi liked my idea, I liked her idea, and I knew it would work well,” Charli said.

The girls worked so diligently that counselors had to remind them to go to sleep.

Charli, a seventh-grader at High Meadows School, recalled: “We knew we wanted to have stereotypes, both dark and positive. We came up with a bunch of ideas and wanted to end with the word ‘self-acceptance’ but didn’t have time to shoot that one.”

In addition to learning the mechanics of filmmaking, Charli discovered what stays on the cutting room floor. As the daughter of two filmmakers, David and Ilene Shapiro, she said her week at Camp Flix boosted her previous knowledge.

Sticking to the camp’s theme of tolerance, Charli and Maddi used Jewish knowledge and experiences to lay out each scene. Maddi’s visual essence is displayed through the main character’s face, a powerful tool used to convey messages of positive and negative adjectives. The film is free of dialogue.

The girls experienced a surge of enthusiasm for their project: 27 campers volunteered to act in the film.

After being nominated for the Atlanta Jewish Film Festival, Charli said, “I knew ours was more of an AJFF film because it was about Judaism. Others had cool concepts; there were good films.”

Charli, the director, and Maddi, a Weber School student who served as the cinematographer, joined Camp Flix founder Tom Karsch, who is also Jewish, as guest speakers at the two screenings of the festival’s Shorts Program 2. The film is also available online.

“This was an opportunity for the kids to really speak about the issues of the day and how they were affecting them personally,” Karsch said. “It was an eye-opening project that produced four really interesting short films.”