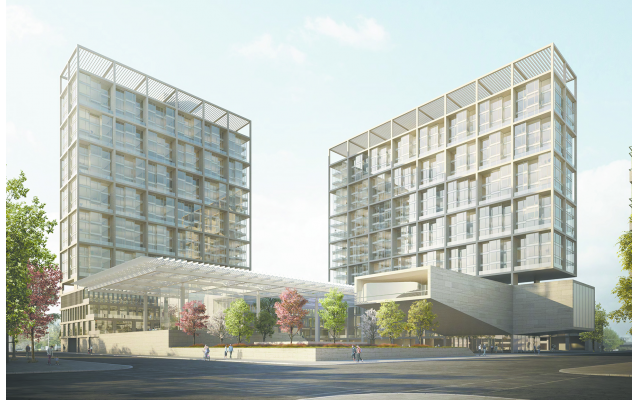 This rendering provided by JFGA reflects an architect’s conception of what a new Federation community building might look like, not a final design that will be built.

After three-plus years as president and CEO of the Jewish Federation of Greater Atlanta, Eric Robbins believes that the organization is facing forward with the wind at its back.

“I think we have a very clear direction. I think we have the right talent, both volunteer and professional, on board to get us there. And we have some momentum,” he said in a July interview.

To meet its priorities – “Ensuring a Jewish Future,” “Caring for Jews in need,” and “Strengthening Jewish community” – the current “20 for 20” fundraising campaign hopes to raise $20 million for fiscal year 2020, which began July 1.

About two-thirds of the money will go to organizations in Atlanta and the United States, with one-third designated to connect with Jews globally, including in Israel and in the former Soviet Union.

In addition, the Federation’s Innovation Fund supports emerging efforts to enhance Jewish life in Atlanta, while targeted philanthropy support programs ranging from books for children to overnight camping scholarships to initiatives for teenagers.

“We don’t just exist to fundraise for the community. If that’s all there is, you could argue there is no relevance for us,” Robbins said. “But who is planning for the future of the Jewish community? Who is bringing the community together? Who is handling security on a community-wide perspective? Who is helping to build relationships with the non-Jewish community?”

That future starts with millennials (born 1981-1996) and the “Gen Z” post-millennials (born from 1997 forward). To connect with them, the Federation backs “Next Gen” involvement with Birthright Israel, convened “The Interchange” forum to explore how the community can be more welcoming toward interfaith families, and pairs younger entrepreneurs with those more experienced, for mentoring and intergenerational learning.

“We’re moving forward on ideas to help support part-time and day school education in the community, and on the concept of a family camp. We have a vision of a camp that operates year-round for families. We would prototype it, lease a site somewhere and try it,” Robbins said.

Meanwhile, the Federation announced a partnership with the Secure Community Network, an initiative of The Jewish Federations of North America and the Conference of Presidents of Major American Jewish Organizations, to manage its security programs. The Atlanta Federation and SCN will work together to hire a new director of community security.

A goal of Robbins when he arrived in 2016, gathering numerous Jewish organizations under one roof, may be realized in a renovation of the Federation’s three-acre headquarters site at 18th and Spring streets.

When Robbins addressed the 2019 annual meeting, a sketch – dubbed “the Jetsons building” (a nod to the early 1960s television cartoon) – appeared on a screen behind him. The drawing was not “the” building, Robbins said, but rather one architect’s idea, a “rendering of what we are exploring having in this space, which is a multi-use building for Atlanta’s Jewish community.”

In addition to Federation’s headquarters, a new building could house workspace for smaller and emerging Jewish organizations, offices or satellite space for more established agencies, more room for the William Breman Jewish Heritage Museum, a small theater, an Israel experience center and, perhaps atop all of these, residential properties.