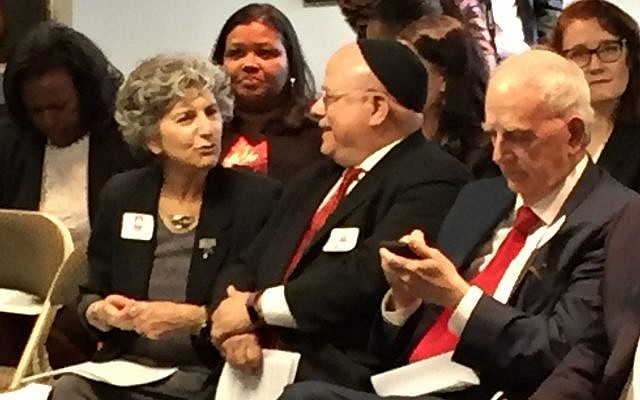 It’s been 104 years since Leo Frank was lynched in the Marietta woods by a confederacy of Cobb County men angry at the commutation of his death sentence in the murder of 13-year-old Mary Phagan in the downtown Atlanta pencil factory that Frank managed.

Speaking to reporters at the Fulton County courthouse after the announcement, former Gov. Roy Barnes credited Rabbi Steve Lebow of Temple Kol Emeth with telling him, “There is no statute of limitations on doing the right thing.” Through his 33 years at the Reform congregation in Marietta, Lebow has been a leading voice in the effort to exonerate Frank.

Barnes, who will be an adviser to the unit, stood with Howard as the district attorney explained that the Frank case fit the fourth of four criteria for re-examination – cases that are in the “interest of justice.”

Frank was found guilty of murder in 1913 in large measure based on testimony by Jim Conley, an African American janitor at the factory, who, according to a former factory employee who came forward in 1982, was seen carrying Phagan’s body.

Barnes recalled newspaper reports that as jurors walked to the courthouse from the Kimball House, where they were sequestered, a mob chanted “Hang the Jew or we’ll hang you.”

The Supreme Court of the United States rejected Frank’s appeals, but on June 21, 1915, Gov. John Slaton, who had doubts about Frank’s guilt, commuted the sentence to life in prison. On the night of Aug. 16, vigilantes, including the grandfather of Barnes’ wife, kidnapped Frank from the state prison in Milledgeville and drove him to the woods near Frey’s Gin Road in Marietta, where he was hung from a tree in the pre-dawn of Aug. 17.

The Georgia State Board of Pardons and Paroles posthumously pardoned Frank in 1986 but did not exonerate him. There is no timetable for the CIU’s re-examination of the Frank case.

Descendants of Mary Phagan have objected to Howard’s intention to re-examine the case, accusing Lebow, Barnes and others of having “colluded” in efforts to clear Frank’s name and said that Barnes should recuse himself from any role in the process.