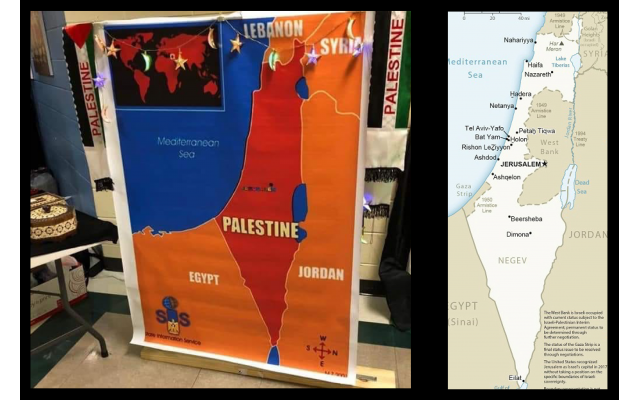 A map of the Middle East with Palestine in place of Israel was displayed at Multicultural Night at Autrey Mill Middle School.

An incident at Autrey Mill Middle School’s Multicultural Night March 7 spurred reactions from members and leaders of the Jewish community.

On the night in question, families at the school of Palestinian heritage displayed a map of British Mandatory Palestine prior to the establishment of the State of Israel in 1948. Many reacted strongly to the idea of erasing Israel from the map.

Alongside the map was an image of “Handala,” a political cartoon of a Palestinian boy with his hands behind his back.

Rabbi Michael Bernstein of Gesher L’Torah, just down the road from the school, argued that while it was difficult to see something, “so disregarding of who you are” in his own community, it set the stage for a discussion of how to treat conversations about Israel in classrooms.

“It’s something that the community doesn’t take lightly,” he said. “I hope it can lead to a conversation because it’s important to understand what’s at stake in how we talk about issues involving Israel, especially in a middle school setting.”

In the wake of the incident, Rabbi Hirshy Minkowicz met with Autrey Mill’s Principal, Trey Martin. Minkowicz said it was important to see it as an opportunity for learning.

“As the school principal so correctly explained to me, … whereas in the past there was no need to check in displays brought in from parents for events as these, we now know that we are living in different times and extra vigilance is needed, … to check and approve before being out in an open forum,” he said.

Edward Ahmed Mitchell, executive director of the Council on American-Islamic Relations Georgia, represented several of the families of Palestinian heritage involved, and noted that some of the children had been bullied after the incident, a response universally condemned by those the contacted by the AJT.

“What has happened now will hopefully create this opportunity for a teachable moment, but I wish it did not happen at the price of these kids having to live in a safe educational environment,” Mitchell said.

After meeting with the principal and confirming the bullying had ceased and no punishment would be given to the children, Mitchell was satisfied, and had met with school leadership and spoken to local rabbis.

“Obviously the way that it happened was very distressing for a variety of reasons, but it happened, and what matters now is the future,” he said.