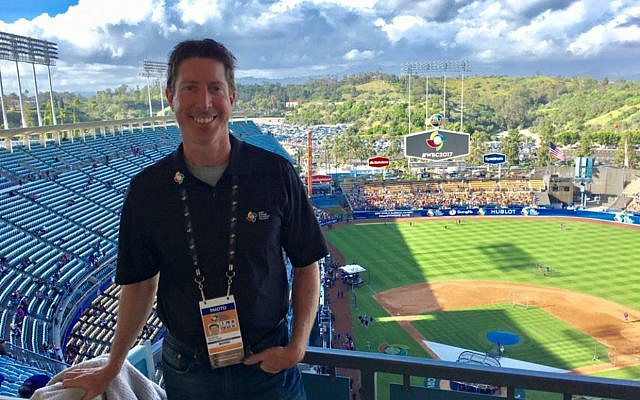 Liebman at the 2009 World Baseball Classic, during which he worked for Team Australia.

Ira Liebman has been a sports fan his entire life, and the new voice of the Atlanta Gladiators minor-league hockey team is settling into life behind the microphone.
Liebman grew up a fan of the Yankees, Islanders, Jets and Knicks, and always dreamed that a career in sports might be in his future.

“When the Yankees lost, I woke up in a bad mood, and when they won, I woke up feeling great,” he said. “There was something there that went beyond the norm and that I knew I needed to be involved with.”

From selling audio technology, Liebman transitioned into a role in broadcasting and interned for WFAN, for shows such as “Mike and the Mad Dog,” but “the next step was getting on the air,” he said.

He started out calling Stony Brook University’s baseball team as they made a run in the NCAA tournament, and transitioned to calling bigger games over 16 years in California, Colorado, Texas and more.

Liebman spoke to the AJT shortly before the season kicked off in October, and since then has been exploring some of the exciting opportunities that his new position affords.

“Some of the guests I’ve had on the broadcast have been big highlights,” he said. “I had Matt Mangum from ‘The Walking Dead,’ and the GM of the Winnipeg Jets on the broadcast. Our second home game was a tribute to the 25th anniversary of the Atlanta Knights winning the Turner Cup.”

As for what’s new to him after a career in baseball, Liebman said, “In baseball you have to kind of tell the story, whereas in hockey the story is dictated by the action. There’s not a lot of downtime for things like profiles of players. The action takes care of itself.”

As for the new venues he’s visited, Liebman pointed to Orlando’s Amway Center in particular.

“I just went to Orlando, which is, I think, the best venue I’ve ever broadcast in,” he said. “It’s the home of the Orlando Magic. … We won one of those games, which was our first overtime game as well.”