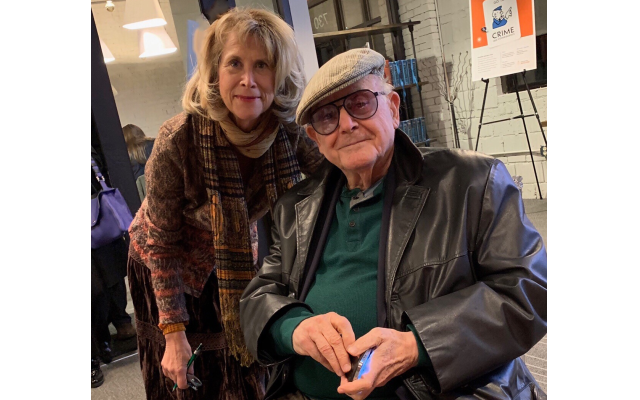 The AJT first reported on Myron Sugerman in January 2019 when he appeared at the Chabad Intown to promote his book “The Chronicles of the Last Jewish Gangster.” He riveted the audience with tales of his prison time, suitcases of Meyer Lansky’s cash, and his own role in nailing the reviled Nazi Joseph Mengele. The assumption was that a thriller movie was just around the bend.

Not so fast. Sugerman, who speaks eight languages and is considered one of the world’s experts on the underworld, especially well-versed in Jewish links to intrigue in Vegas, boxing, the beginnings of Israel (and how helpful cash “got” there), Bugsy Siegel, the Stern Gang, and even Jack Ruby, is not ready to settle. Current discussions with agents, producers, and script writers envision a six-part series focusing on his Simon Wiesenthal Nazi hunter connection. Sugerman cracks, “I helped him immensely, but it was sideline, … my main purpose was running illegal gambling machines throughout the city of New York and knowing every mobster from every street corner with whom I did business. I don’t want to fictionalize when what I witnessed with my own eyes makes the real story … there are four groups vying for the story. One of the interested parties is Daniel Finkelman, who produced ‘Menashe.’

“I did help Wiesenthal, but Finkelman’s focus is ‘the gangster and the Nazi Hunter’ and is fiction.” Sugerman can go on for hours with tales about joint ventures with Arab underworld bosses from Beirut operating Bally slot machines in the slums of Nigeria in 1970 “with incredible sums of money coming out of the depths of Africa.” He furthered, “There was a major mob battle over my jurisdiction. The Gambinos claimed me, then Tony Bananas, the caporegime of Newark from the Angelo Bruno Philadelphia Mob claimed me and then finally the Genovese people.”

Sugerman sent money to Wiesenthal and traveled to South America using his language skills to convey messages between survivors and lawyers to nab Nazis. He concluded, “Do it [the series} right or not at all.”

To get things moving, Sugerman is scheduled to speak Jan. 6 at Beth Jacob Congregation, Beverly Hills. On that trip, he’s planning more script meetings and enlisting some big names to get on board. One that Sugerman is aiming for is actor-producer Jason Bateman.

No stranger to stars, Sugerman consulted with Dustin Hoffman on a past movie characterization.

More about what he does want in the series: “Every mob in New York besides Italians, Russians, Israelis, Cubans, Albanians, Greeks, Dominicans, and Puerto Ricans were coming to see me every minute of the day for machines, technicians, business propositions; but most of my day was spent in mob sit-downs adjudicating disputes. Some of those got hot; … there were those that ended up ‘very ugly.’”

When asked what “very ugly” means, Sugerman said, “Alfredo could end up being Fettucine Alfredo.”

Netflix here he comes! We will be watching.