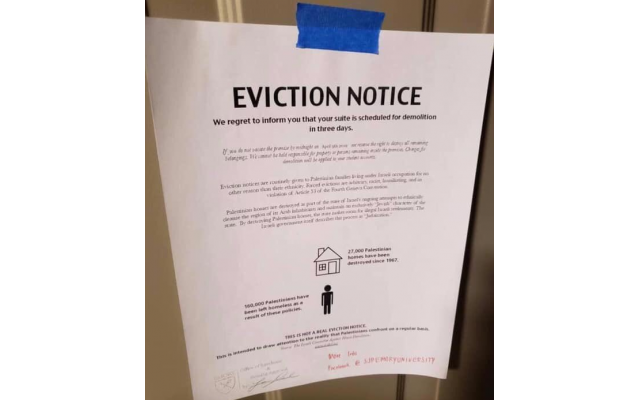 When Emory Israel Week and Israeli Apartheid Week come around in the spring of 2020 Emory University officials will hope for less controversy than the campus experienced a year earlier.

Mock eviction notices created as part of a pro-Palestinian student protest appeared April 2 on doors at the Emory Clairmont Campus and the Woodruff Residential Center, and at the off-campus Emory Point apartments.

The university will hope to avoid a repeat of the confusion that saw the flyers initially approved by the Emory Residence Life office, then ordered removed because they violated a policy against posting flyers on dormitory doors without student consent.

“In reviewing this incident, we found no evidence that individual students or a particular group were targeted,” the university said in an April 3 statement.

The official-looking notices, which stated that the dormitory would be demolished in three days, were posted by Emory Students for Justice in Palestine, as part of Israeli Apartheid Week. The annual anti-Israel event took place the same days as Emory Israel Week, sponsored by Emory Eagles for Israel.

The flyers read: “Palestinian homes are destroyed as part of the state of Israel’s ongoing attempts to ethnically cleanse the region of its Arab inhabitants and maintain an exclusively ‘Jewish’ character of the state.” A disclaimer at the bottom of the flyer advised that the warning was not real.

Similar flyers have been posted on other campuses in recent years.

An estimated 17 percent of Emory undergraduates and 10 percent of its graduate students are Jewish, according to the Hillel International website.

“The anti-Israel activists who passed out these notices are creating tension, intimidating and isolating students, and fostering a hostile atmosphere on campus. The academic environment should be a place where constructive dialogue and discourse about the Israeli-Palestinian conflict can thrive, not a place where perspectives regarding the conflict infringe on students’ personal space,” the letter said.

The chances for dialogue were not enhanced by statements issued April 5.
Pro-Palestinian students, contending that “right-wing extremist groups are smearing student activists,” called for the university community to boycott several Jewish campus organizations.

Rabbi Russ Shulkes, executive director of Hillels of Georgia, said that it wanted: “The Emory SJP chapter punished. They should not just receive a slap on the wrist for putting up a flyer in the wrong place. They purposefully flouted their responsibilities of an Emory club in good standing. … SJP’s Emory University adviser should resign, or be asked to resign and the university should assign another adviser. … SJP should, at the very least, be on probation for at least one year.”

Sterk acknowledged April 5 that “this week’s events exposed several flaws in our process for the approval, authorization, and distribution of flyers.”

“Emory’s commitments to creating an environment where all members of the community feel safe and protected and to upholding free speech and vigorous debate remain unquestioned. Emory stands firm against all forms of racism and intolerance,” Sterk said in her statement.

On April 12, Sterk sought to mollify Jewish concerns. “I have had the privilege of listening to the concerns of a wide range of voices both within and beyond our Emory community. I have been deeply moved not only by what I’ve heard, but also by the personal pain shared by students — and by members of the wider Jewish community — who feel threatened, afraid, and angry,” she said in a statement.

[Sterk will step down as university president in August 2020.]

In mid-April, a report issued by a committee of the Emory University Senate concluded that, aside from the improper posting of the mock eviction notices, “the rest of the flyer is fully protected political speech under the Open Expression Policy.”

Emory Law professor Alexander “Sasha” Volokh, chair of the Senate Standing Committee for Open Expression, also cautioned that “Anyone saying that this committee determined that the flyers were not anti-Semitic, they are saying this with no basis, in our opinion.”