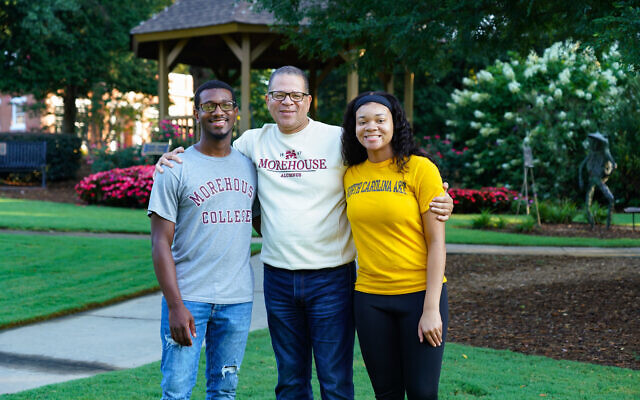 John Eaves with his children, Isaac and Katura.

In October, we spoke to the Atlanta Jewish community about the work that needs to be done in welcoming Jews of color. Heidi Senior, one of the many Jews of color in Atlanta, said that she feels like “a round peg in a square hole.”

Senior, a biracial woman whose mother was Jewish, and her family, haven’t had positive experiences with synagogues in the past, leading them to feel dismissed.

“I don’t see people who look like me in shul and we don’t want to feel like we have to have proof of being Jewish,” Senior said.

Brian Weiss and his wife Yang Yang, who is Chinese, are both in leadership positions at The Temple. Yang converted to Judaism, but there have been times at other synagogues where “the guy greeting people said, ‘Shabbat Shalom’ to Brian and not to me,” she said. “It’s still a novelty [to people], but I’m happy to share my story.”

Tarece Johnson, a black and Jewish diversity professional, is making efforts to educate the Atlanta Jewish community about inclusion. Since she spoke to the AJT for the original story, she led an event Dec. 22 at The Epstein School about diversity in education for Jewish educators and other youth organizers, as well as students.

She also led an event at The Weber School with JumpSpark to develop leadership skills in Jewish teens exploring diversity, inclusion, and how to live values of chesed (loving-kindness) and kavod (respect.)

“This should be embedded in the curriculum. Diversity should be taught in arts and crafts and incorporated into history classes,” Johnson said of her education work earlier this year.

A recent study released in May called “Counting Inconsistencies” showed that 1 million out of 7.2 million Jews in the United States are Jews of color, around 12 to 15 percent. Jewish organizations and synagogues are just beginning the work of recognizing this diversity, said Rabbi Ruth Abusch-Magder, director of education for Be’chol Lashon. “This is work that will have to happen institution by institution and by the community as a whole.”

Some synagogues have made efforts to educate congregants about diversity. For Sukkot this year, The Temple organized a Unity Sukkah at which about 235 people wrapped yarn around 32 poles that stated various ways of identifying, creating the roof of the sukkah.

According to Abusch-Magder, “I’ve been doing this work for a decade and I’ve seen more emphasis on diversity, but change will not come quickly enough to fix the problems already there.”