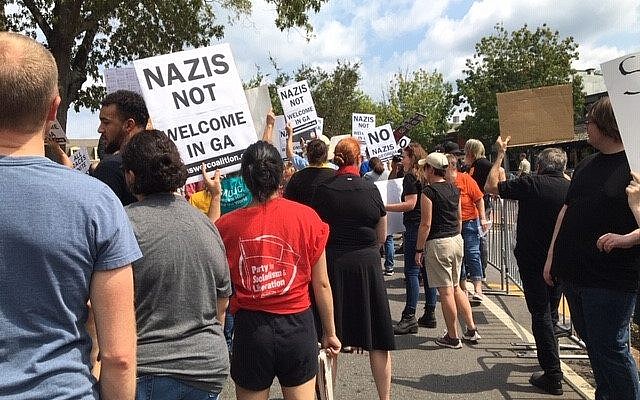 Photo by Roni Robbins // Signs protest Nazis and white supremacy at the rally.

The quiet town of Dahlonega, known for its gold rush, became the scene of a rally Sept. 14 pitting a small group with ties to white nationalists against triple the number of protestors fighting the perceived hatred they felt from the other side of police barricades.

A known member of the Ku Klux Klan and white supremacist movement, Chester Doles, organized the “Patriot” demonstration. It was originally advertised as a rally in support of President Donald Trump. A number of the demonstrators touted their support of the president, the military and police.

Doles is a Lumpkin County resident, which is why the rally was held there.

The protestors carried signs such as “Nazis not welcome in Georgia” and chanted refrains such as “Sexist. Racist. Anti-gay. All the Nazis go away,” “No Nazis, No KKK. No fascists USA,” “No hate, no fear, immigrants are welcome here,” and “When black people are under attack, what are we going to do? Stand up, fight back.”

More than 450 officers from throughout the region came to maintain the peace, far outnumbering the two factions. The patriot group made no mention of Nazism and the only sign of far-right beliefs was a small group wearing T-shirts stating: “Confederate Patriot Rebel: Breathing Life Back into the American People.”

No violence was reported, and religion was only mentioned briefly when one pro-patriot speaker cited lessons from Jesus, while there were pastors and church groups among the counter-protestors.

A week before the rally, the Atlanta Journal-Constitution reported that Doles had been in and out of federal prison and was on probation for a 2016 assault. At the rally, Doles summed up his violent checkered past as “youthful indiscretion.”

Speaker Jovi Val was probably the most radical of the assembly. Online sources say he is a far-right neo-fascist who promotes political violence, and he became a white nationalist with extremist views, including anti-Semitism. At the rally, he expressed disappointment more Confederate flags weren’t being carried.

Counter-protestors were concerned the rally gave far-right demonstrators a chance to gain a foothold in Georgia.

Although many of the downtown businesses were closed for the rally, a few remained open. Outside one restaurant there was a rainbow-colored flag and a sign with an American flag containing a heart with the phrase: “Hate has no home here.”