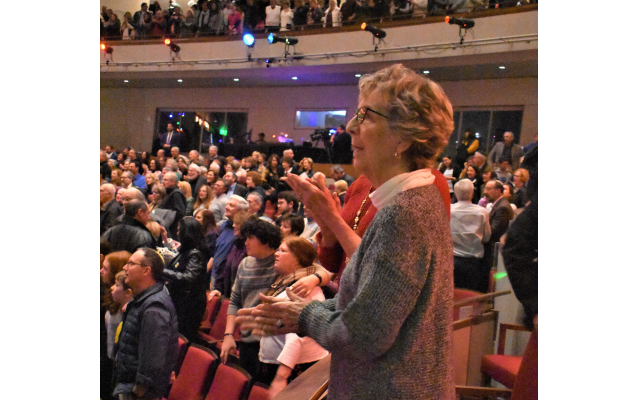 The event audience of 1,100 people filled all three levels of the Byers Theatre at City Springs.

At the close of the Jan. 6 “Jewish Atlanta Solidarity Event,” hundreds of men and women, their arms draped across shoulders to their left and right, swayed side-to-side as they chanted the sounds of a niggun, a wordless song, led by Rabbi Pamela Gottfried of Congregation Bet Haverim.

The 1,100 people who filled all three levels of the Byers Theatre at City Springs, and another 450 watching in an overflow room, heard a mixture of testimonies about anti-Semitism and various calls for actions to counter history’s oldest hatred.
The program was prompted by recent attacks against Jews in New York and New Jersey, which have resulted in at least three deaths and numerous injuries.

In response to those incidents, on Dec. 29, the last night of Chanukah, 300 people gathered for a menorah lighting at the Toco Hills Shopping Center. Rabbi Adam Starr of Congregation Ohr HaTorah (formerly Young Israel of Toco Hills) organized that gathering after hearing of Jews afraid to display holiday candles following the machete attack at a celebration in Monsey, N.Y.

Speaking at the Atlanta solidarity event, Eric Robbins, president and CEO of the Jewish Federation of Greater Atlanta, said, “Just one week ago I got a call from Rabbi Starr. This event unfolded unbelievably in this week, with collaboration, with no egos, to bring you together to help you feel more secure.”

The program was organized by the Federation, American Jewish Committee, Anti-Defamation League, Jewish Community Relations Council of Atlanta, and Atlanta Rabbinical Association. Robbins noted that the audience included clergy of other faiths, as well as municipal and county officials, state legislators and representatives of foreign governments.

The evening began with Rabbi Ari Kaiman of Congregation Shearith Israel leading the singing of the Hebrew song “Kol Ha’Olam Kulo, Gesher Tsar Me’od,” which translates in English to “The Whole World Is A Narrow Bridge.”

Starr declared, “This is the Atlanta Jewish community at its very best. We’re gathered here proudly and publicly. And this evening it doesn’t matter what you have on your head or what you don’t have on your head, what synagogue you affiliate with or what synagogue you don’t affiliate with, whether you are Conservative, Reform, Orthodox or Reconstructionist. This evening we are all one, members of the Jewish community of Atlanta, proudly and publicly acknowledging our Jewishness.” 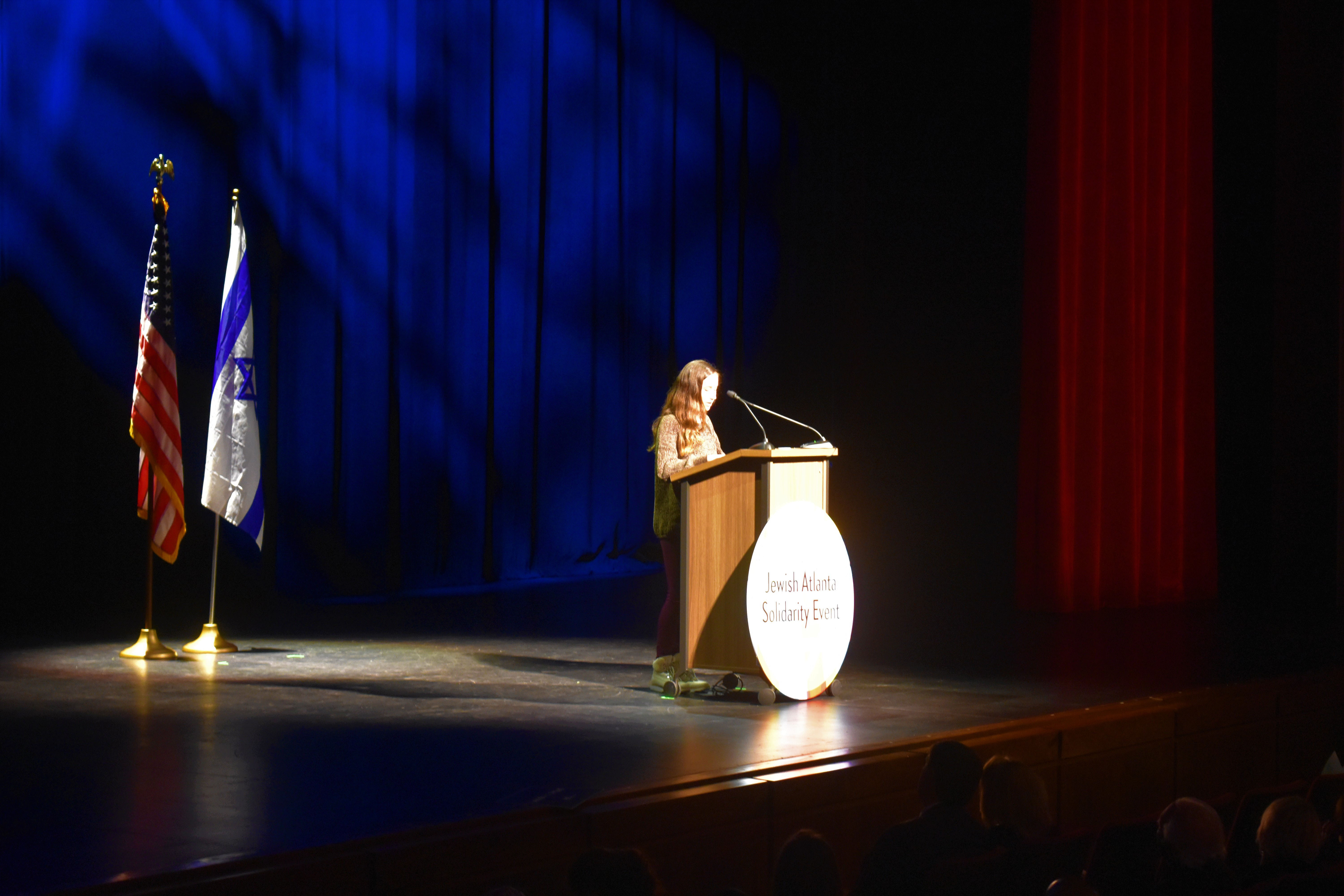 Sydney Levine, a student at North Gwinnett Middle School, talked about her response to acts of anti-Semitism.

Among the testimonies was that of Sydney Levine, a student at North Gwinnett Middle School, who told of how she endured four incidents of anti-Semitism the previous year, as a seventh grader, incidents that she reported to school authorities, county officials, and the ADL

One involved a boy who said “Kill all Jews” on her school bus. “Another student asked why I told on him. He said, he was just joking,” Levine related. “My answer was that it didn’t come from nowhere. The fact that he could think that and say that aloud came from deep down inside him.”

Victoria Raggs offered a perspective unfamiliar to the majority of America’s 6.5-million-plus Jews, that of an African American, one of an estimated 1 million “Jews of color,” a figure drawn from a study released in May by the Jews of Color Field Building Initiative.

Raggs has been a member of Congregation B’nai Torah for 13 years. She has traveled to Israel with Momentum (formerly known as the Jewish Women’s Renaissance Project). Her children have attended the Atlanta Jewish Academy, The Epstein School, and The Weber School, as well as Jewish camps and JCC Maccabi Games.

Nevertheless, “With all that Jewish living, I’m still told, ‘But you don’t look Jewish,’” she said.

“Denomination, affiliation, observance levels and ethnicity seem monumental to us. We should take a cue from our enemies, who believe that a Jew is a Jew is a Jew,” Raggs cautioned. “Every Jew counts. We are only as strong as our weakest link. … Jews are strong together, but separate and divided we are weak.”

Rabbi Yossi New of Chabad of Georgia presented a more stereotypical Jewish face. “I am a Chasidic Jew. I look like many of the victims in Brooklyn and New Jersey. I know I’m stating the obvious, but it’s not how Jewish you look that causes anti-Semitism. The way one looks is merely the canary in the coal mine,” New said.

Several speakers thanked members of other faiths for their support when Jews have been attacked, whether at the Tree of Life synagogue in Pittsburgh in October 2018, the Chabad of Poway, Calif., in April 2019, or the recent attacks in the Northeast. “We are so grateful for your support. You can’t imagine how much it means to us that we are not alone in this fight,” Starr said to applause.

Rabbi Laurence Rosenthal of Ahavath Achim Synagogue, who is president of the rabbinical association, went a step further. “When people of other faiths reach out to support us, take their hand. We have been intoxicated with this idea that we are a light unto the nations,” Rosenthal said. “The world doesn’t know how to care for one another. We know how to do that.”

After a gunman killed worshippers in a Texas church, Rosenthal sent notes of condolence to local Christian clergy. Jews should extend to other faiths the kind of support they have received, he said. “Send them a letter. Reach out to that church and offer your support. Share your compassion and your love for them. Show them that they’re not alone.”

“Hate crimes are designed to cause pain and hurt well beyond the original victim. Hate crimes are intended to silence and eliminate our most valuable possession, our identity,” Padilla-Goodman said.

Emory University professor and Holocaust historian Deborah Lipstadt addressed the event by a video feed from Washington, D.C., where on Jan. 8 she was scheduled to testify before the United States Commission on International Religious Freedom.

Call anti-Semitism what it is, “Jew hatred, because that’s what it means,” Lipstadt said. “We have to remember and understand that it is a threat to democracy. It’s not just a threat to Jews; of course, it’s that. It’s also a threat to the health of our democracy. Photos courtesy of Jewish Federation of Greater Atlanta // “I am Israeli. I am Jewish. And I am proud,” Anat Sultan-Dadon told a packed auditorium.

That message of pride was echoed by several speakers.

“I am Israeli. I am Jewish. And I am proud,” said Anat Sultan-Dadon, Israel’s consul general to the Southeast United States.

“Remember, there is a great resilience in the Jewish spirit. Be proud of who you are. Do not permit fear to diminish you,” said Rabbi Alexandria Shuval Weiner of Temple Beth Tikvah, who is vice president of the Atlanta Rabbinical Association.
New’s recommendation was that “All of us can strengthen Jewish identity just be being proud of who we are and displaying it fearlessly and unabashedly.”