Caterer Annette Marcus reveled in her good fortune, saying, “I must be the only caterer in the universe to get phone calls to prepare two birthday parties for amazing Jewish centenarians back to back.”

Annette, who has been catering in Atlanta for the past 35 years, rolled out the “kugel carpet” for Teddy Haber, 101, and Mary Ginsburg, 100, both celebrating their birthdays in November at separate events.

“It’s really remarkable for those who reach these senior milestones; and I relish bringing them joy through food.”

Marcus’ own mother, Charlene Sacks, 93, is an inspiration who visits here seasonally and helps Annette in food preparation.

What the recent birthday events had in common was sweet noodle raisin kugel.

The Haber event was coordinated by younger sister Rita Marokko, 94, whom Annette credits with having a flair for event planning. Their menu was nova, bagels, tuna and egg salads, Caesar salad, and desserts such as mandel bread and chocolate mousse parfait.

The Ginsberg event was championed by daughter-in-law Jodi. That menu was Greek salad, and spinach, mandarin orange salad with honey goat cheese, caramelized pecans and ginger balsamic vinaigrette in addition to bounteous kugels. 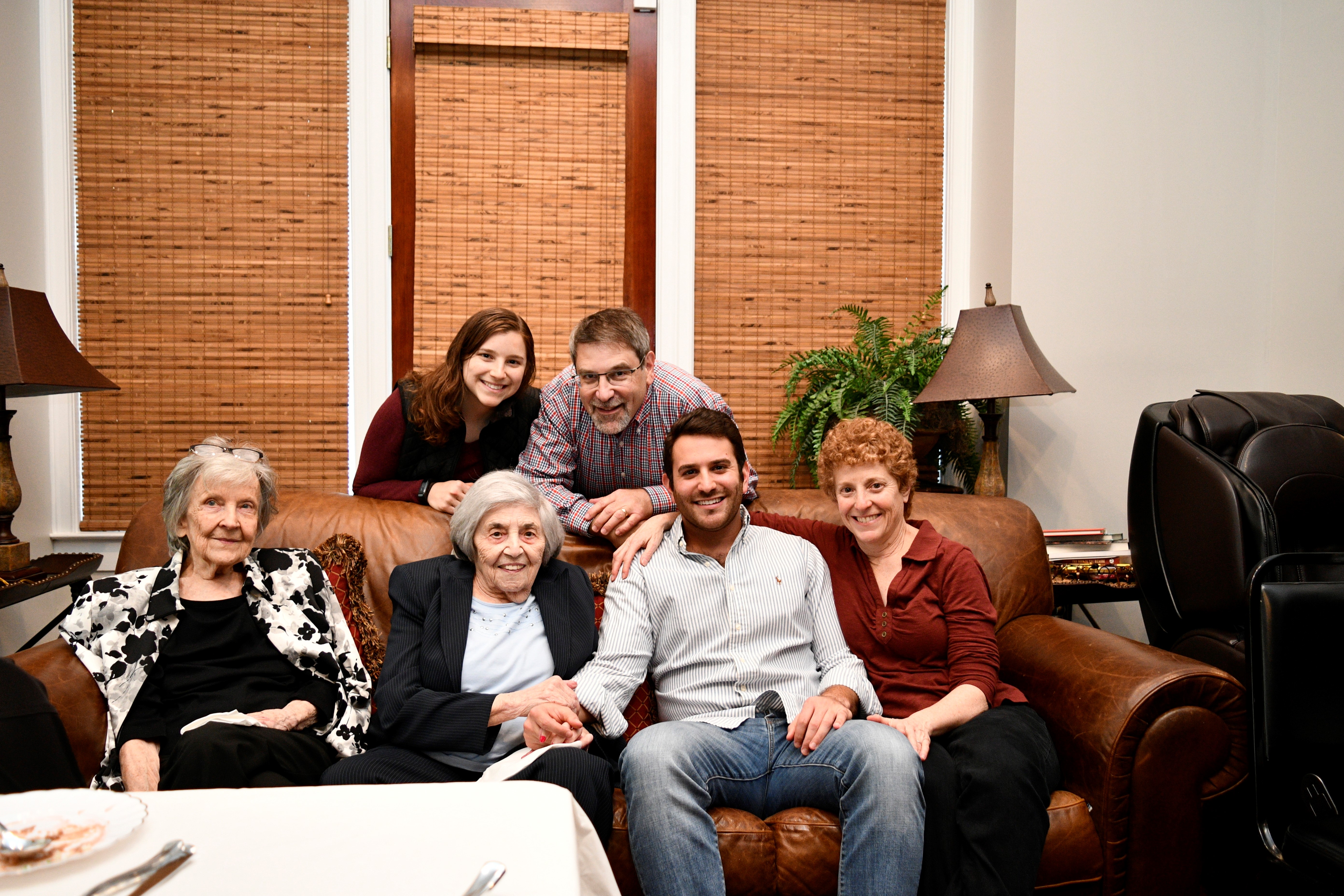 Mary Ginsberg, front row, second from left, was a “calm” mother, according to son Jonathan.

Ginsberg is a native Atlantan and grew up near Grant Park.

After a public school education, she attended Oglethorpe College. Ultimately, she learned entrepreneurship at her father’s grocery store. As a 23-year-old single gal, she “up and moved” to Washington, D.C., in 1942 to work for the U.S. Federal Communications Commission. After the death of her father, she moved back to Atlanta to help out, and Aunt Minnie Tillem “set her up” for marriage to Max Ginsberg in 1958.

As a working girl, Mary assisted Rabbi Harry Epstein at Congregation Ahavath Achim, then worked for philanthropist Max Cuba in his insurance business. Local attorney and only child Jonathan Ginsberg recalled, “Mom was able to work and raise me at the same time. My parents purchased Southeastern Drug Journal (later Southern Pharmacy Journal) in 1960 while Mom handled the books and admin duties.”

Mary is believed to have created the first national pharmaceutical continuing education program in the United States, allowing pharmacists to obtain their credit hours by mail.

Health conscious before her time, Ginsberg could be found at the Marcus JCC swimming and in exercise classes. When she was widowed in 2008, Mary toured the world on cruises.

Speaking on behalf of his mother, Jonathan said, “Mom was calm with an optimistic personality, always looking forward. She attributes her longevity to not worrying about things out of her control.” Her party for 55 included relatives from Los Angeles, Ohio and Alabama.

At the lunch, daughter-in-law Jodi joked, “No one had to pay me to say nice things about my mother-in-law. She was always very kind.” 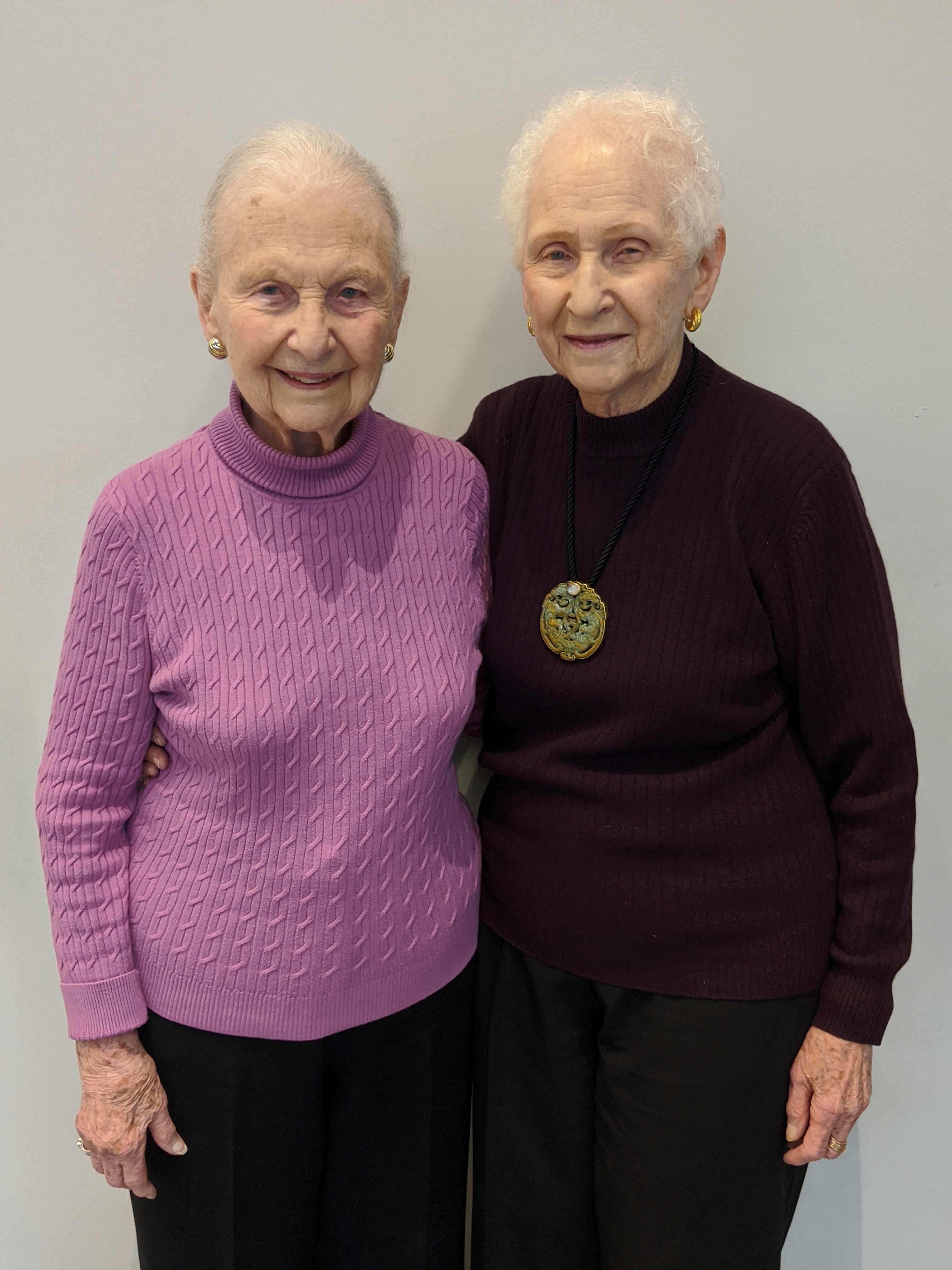 Post-World War II, Brooklynite Haber headed to Atlanta with her husband, who had secured a job on Peachtree Road for Ford Motor Co. She recalled, “In 1946, I was a substitute teacher here, and Atlanta was a pretty nice place. It was different in that there was very little traffic, and we could drive easily to downtown. If the errand was quick, we’d leave the car unlocked and running!”

The couple lived in the Clermont Hotel, which Teddy thought was pretty great because it had both a separate sitting room, bedroom and kitchen. She gave up driving eight years ago at 93. “I do employ a driver now to get to appointments, and I make sure to do my weekly toning and stretching exercises.”

Teddy takes an occasional nip of scotch or wine; and her favorite television show is “NCIS.” She discounts watching the news, “It’s just the same thing over and over and over.”

When asked about her mantra for a long life well-lived, she said, “I try to have a positive attitude and focus on being kind and thoughtful. I believe in doing the right thing at the right time.” She concluded, “I’m amazed at how fast the years go. It’s holiday time again and I haven’t had time to turn around from last year.”