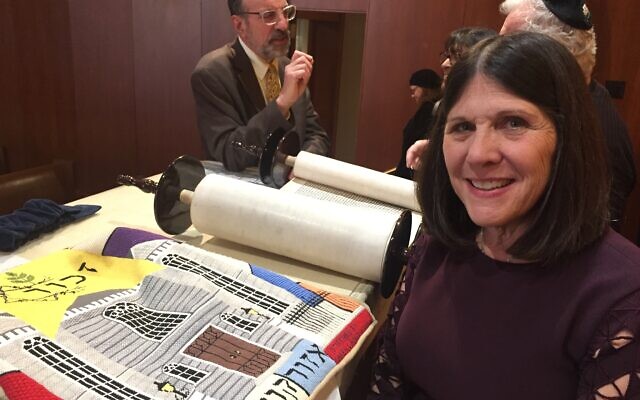 Karen Lansky Edlin stands with the Ozorkow Torah and its mantle, which she designed. Standing behind her is Rabbi Neil Sandler. The Torah, which her parents presented to the congregation in 1977, was rededicated Jan. 5.

A Torah that survived the decimation of Polish Jewry during the Holocaust was rededicated Jan. 5 at Ahavath Achim Synagogue more than four decades after the scroll from the town of Ozorkow was presented to the congregation.

Karen Lansky Edlin was present when her parents, Ruben and Lola Lansky, presented the Ozorkow Torah to Ahavath Achim in August 1977 and again as the sacred scroll was rededicated. Ruben had grown up in Ozorkow and Lola’s grandparents lived in the town. They learned of its survival during a trip to Poland in 1975 and arranged with Tobias Drajhorn, the lone Jew then living in Ozorkow, to transfer the scroll to Ahavath Achim. 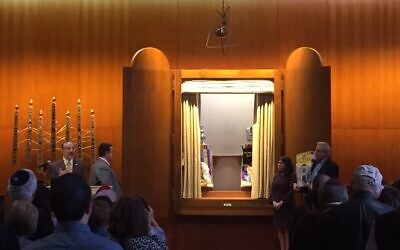 Lansky Edlin and her husband Andy Edlin arranged for the scroll, thought to be 150 to 200 years old, to be refurbished this past year by a sofer in Miami, who restored its text – letter by letter – to a luster that had worn away over the decades.

In rededicating the scroll, Rabbi Laurence Rosenthal linked the departed of Ozorkow and the congregants of Ahavath Achim, saying, “Their souls live on and are now tied with ours.

“When we use this scroll, we become the vessel that is sanctified,” Rosenthal said.

Lansky Edlin told her fellow congregants about the symbolism of the Torah mantle that she had designed and sewn, including remembrances of the Holocaust and symbols of the 12 tribes of Israel, just as stained glass windows in Ahavath Achim’s sanctuary remember the 12 sons of Joseph.