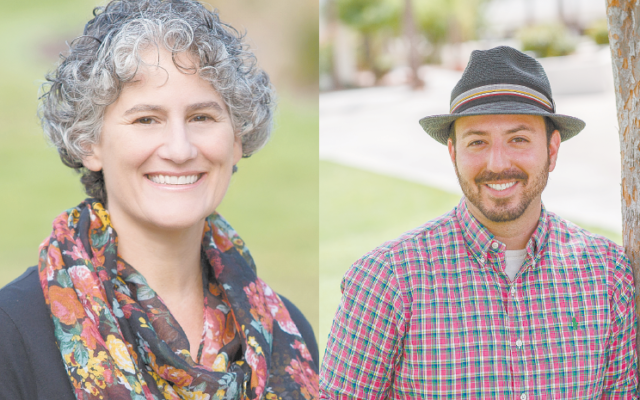 Charyn, or Rabbi Jesse to his congregation, was the answer to a nearly three-year search at TBD. He came to Atlanta after serving in the Israel Defense Forces, where he met his wife, Shira, and studying at Arizona State University and the Jewish Spiritual Leaders Institute.

He made the drive to Snellville from Arizona, and recently spoke to the AJT about his time since stepping up to the bimah.

“Everyone is passionate and filled with excitement and a rabbi is a very important part and the spiritual director of a congregation,” he said. “TBD didn’t have that direction for the last few years and everyone is so excited, and we have people with young families and people who were members coming back.”

He shared that the excitement has expanded since he’s landed in town, with increased programming, classes, and lunch and learns that he’s been able to get off the ground, and a new opportunity during Chanukah this year.

“We’re going to have the first-ever public menorah lighting on the Snellville town hall green,” he said. “We had a congregant whose family works in the construction industry that built a very large, beautiful menorah for us to light.”

Gottfried is not new to Atlanta, and prior to her new role, served as the dean of Judaic studies at The Weber School. This summer, however, kicked off a journey in redefining what the role of a rabbi could be.

With the support of a PROPEL Grant from Jewish Federation of Greater Atlanta and a Reconstructing Judaism Innovation Grant, the position is part of CBH’s “Your Jewish Bridge: New Pathways for Your Jewish Connection,” program.
“I was really happy teaching and I loved my job at Weber, and I wasn’t really looking for a job,” Gottfried said, “but when I found out about this position, I was really drawn to it.”

Combining traditional congregational work and outreach to Jews unaffiliated with any congregation, the post aims to make Gottfried a resource for all Jews in Atlanta.

Gottfried recently reflected on the first few months in her new post, saying she was grateful to have the support of CBH’s staff and membership in launching the initiative.

“My earliest referrals were from CBH members, who helped spread the word that the synagogue had engaged a rabbi to serve the educational, pastoral and lifecycle needs of the unaffiliated in our community,” she said. “After two months of meeting people individually to discuss these needs, along with facilitating some programs, … I was officially introduced to the wider community on Rosh Hashanah.”

As for what the next few months entail, Gottfried looks forward to continuing to deepen relationships at CBH, as well as officiating numerous lifecycles for those who have found her through Your Jewish Bridge.

“We’ll be celebrating at CBH and MACoM, and in their homes and backyards,” she said. “It’s a privilege to serve those in need of pastoral care during times of illness and bereavement and a joy to welcome babies and teenagers into the covenant, and counsel couples and plan their weddings.”