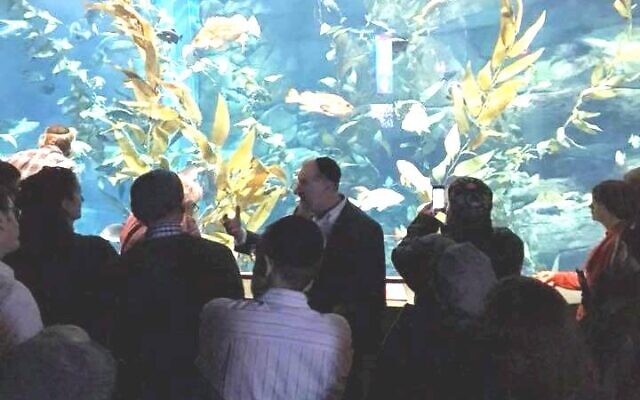 Fish can be a source of Jewish learning, according to Rabbi Becher.

For most people, Judaism may not be the first thing that comes to mind when visiting aquariums. However, for Rabbi Mordechai Becher, animals are a source of infinite Jewish learning. Becher has given tours all around the world in aquariums and zoos, sharing lessons from the Torah and Talmud with fresh Jewish learning at each exhibit.

So it’s no surprise that Becher, Australian senior lecturer for Gateways, which offers continuing Jewish education, will be giving such a tour at the Atlanta Jewish Life Festival Jan. 26, sponsored by the Atlanta Scholars Kollel.

Growing up in Australia, he felt a great love of animals from a young age. “I had a dog for 13 years. One of my favorite activities was going to the zoo.” That fostered his interest in zoos and aquariums as he grew older, while spending many years studying in yeshivas and rabbinical schools.

Drawing from a variety of Jewish sources, Becher’s tours connect animals to people and to Judaism. “Let’s say we come across a monkey,” he said. “There I would mention a few things.” Becher described cases where it’s required by halachah, or Jewish law, to wash your hands, for example, before eating a meal. This is supposed to be done by human power – with intention, Becher said. “There’s actually an opinion that if you train a primate, they’re close enough to a human that it’s considered to be an intentional action.”

Rabbi Becher spoke about how the land Israel inhabits is “one of the most central points for bird crossing in the world.” He gave the example of the stork, which crosses the land during the month of Nissan, when the exodus from Egypt took place. Called a chassidah in Hebrew, the stork’s name shares a root with the word chesed, meaning compassion, giving its crossing at that point in the Jewish calendar deeper meaning.

“I often talk about animal life,” Becher said of his rabbinic teaching. He works as a tour guide in the summers and has done these types of tours at places such as the Ripley’s Aquarium of Canada in Toronto, the Toronto Zoo, and the Dallas Zoo, and in a number of other countries. Though he’s visited Atlanta in the past, this will be his first time leading Jewish tours at the Georgia Aquarium.

There are many examples Becher enthusiastically described of some of the fascinating things people may learn during the series of aquarium tours that will be happening throughout the day at the AJLF. One of the more famous examples of how sea creatures connect to Judaism is the blue shade mentioned multiple times in the Torah, known as “techelet,” that was used to dye tzitzit, tallit fringes. 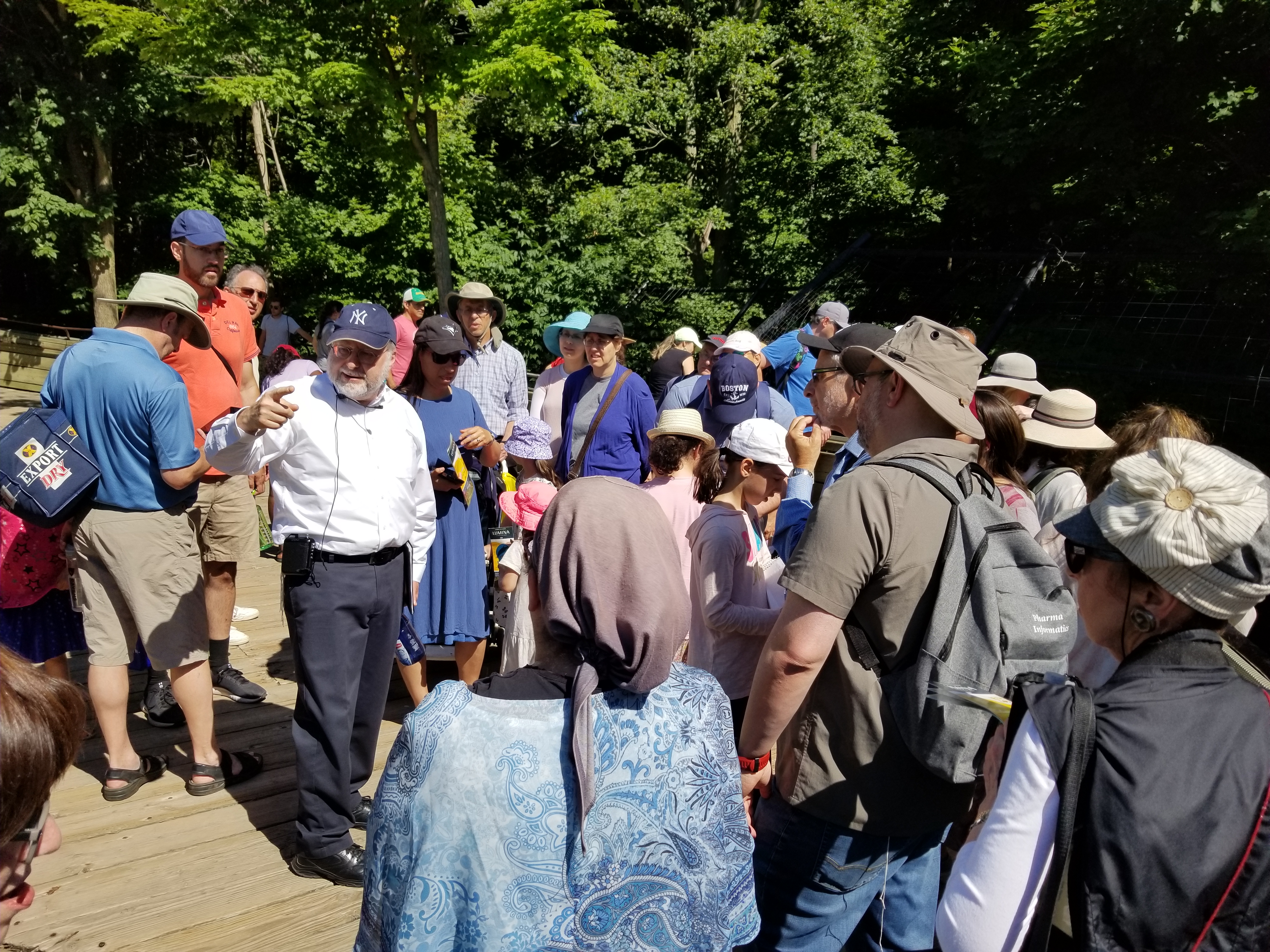 Rabbi Mordechai Becher leads a Jewish tour around a zoo.

“The knowledge of how to produce that was lost in the Roman occupation. There was a Chasidic rabbi in the 19th century who spent years speaking to aquariums,” and eventually came to the conclusion that the sea creature that provided the color was a cuttlefish, a type of squid, Becher said. However, the chief rabbi of Israel, Rabbi Yitzhak Herzog, rejected his thesis. “He came to the conclusion it was not a sea squid but was actually a type of sea snail.” There are still ongoing debates about what type of sea animal provided the source of techelet.

Another example Becher gave connecting fish and Judaism was about the vastness of animal life in the ocean. “The largest animal to have ever lived on the planet, which is a blue whale – a human could swim through its aorta. An African bull elephant can be up to 12 tons and a whale up to 200 tons,” he said.

“King David described the sea as ‘there are creatures without number, massive and small creatures.’ In fact, the sea contains the largest creatures and also the smallest. It’s estimated the number of microorganisms in the sea is actually greater than the number of stars in the universe.”

King David’s wonder at the sea was just one reference to animals that can be found in Jewish texts. There is a story Becher may mention from the book of Kings in which King Solomon receives gifts of parrots, monkeys and ivory. The gifts came from a place called Tarshish, which appears from the types of animals that might be in India or Africa, Becher said. The multitude of animals in existence is intimately connected to Torah and Judaism, he said. “The Tanach mentions about 150 different species of animals. Animals feature a lot in the Torah and different attributes, character traits, are represented by animals.”

In fact, the number of animals mentioned in parts of the Tanach such as Song of Songs has many Jewish interpretations, according to Becher. “Some understand that as meaning the animals’ very existence is a song to G-d,” he said. Others say it has more to do with human connection with the animals and G-d, or other various poetic and religious interpretations. “Either way,” Becher said, “it identifies every animal with a different song.”

Along with running the tours, Becher has a prolific backg 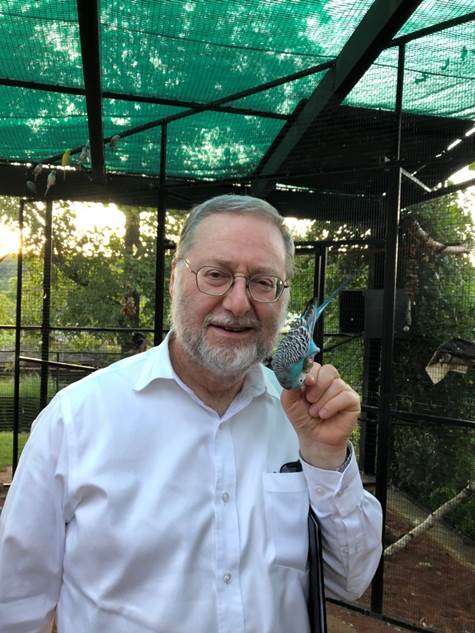 Becher poses with a bird.

round in other aspects of Jewish teaching. He co-authored two books and wrote his own, called “Gateway to Judaism,” which gives the reader accessible insights into Jewish practice. “The book is basically entitled the how, what, and why of Jewish life. I try to cover virtually every aspect of Jewish life,” he said. “It’s a text that’s used for converts, but also used by people to study together.” The United States Army even bought a couple hundred copies of the book for their chaplains to learn from, Becher said.
From a Jewish perspective, he sees one of the roles of people as protecting and conserving animal life. As Becher’s formative connection to animals began in Australia, the devastation of the widespread bush fires has been difficult to watch.

“It’s unbelievably upsetting,” he said. “It’s horrific to see the decimation of koalas and kangaroos.” Though his main concern is the safety of the people in Australia who are suffering from the fires, “there’s a component to the animals in the helplessness of the animals.

“We have a stewardship; we have obligations toward the animal world to protect and care for it.”

His tours touch on this aspect of life, as Becher draws and cultivates intimate spiritual connections between people and animals. “I’m hoping that it will give people a better appreciation of the incredible world that we live in. We take a lot of things for granted,” he said of the upcoming aquarium tours. “I think it’s an amazing, an incredible world. To appreciate the creatures. The interconnectivity, the fact we’re all connected through the ecosystem. It’s not only physical; there’s a moral ecosystem.”