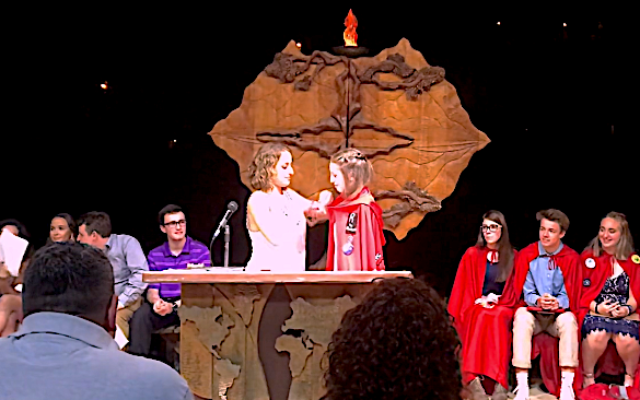 Sara Neuberger, on right, received a red cape when she was installed as president of the Southern Area Region of NFTY.

At 14, like many of her Jewish friends, Sara Neuberger was contemplating her teen years without much connection to Jewish life. Her calendar was quickly filling with homework, after school sports and a busy social life. As with so many teens, her bat mitzvah the previous year was looking more and more like the end of her interest in Judaism rather than the beginning.

But that was before her mother secretly signed her up for an event sponsored by the NFTY chapter at her synagogue, Temple Sinai. NFTY, which stands for North American Federation of Temple Youth, is the Reform movement’s program for teens between the ninth and 12th grades. It has about 8,500 members spread across 750 chapters in North America.

Well, maybe she would try it, she thought, to please her mother, but just this once. What she encountered delighted and intrigued her.

“I really didn’t know what it was, but when I got there, I found it to be very welcoming. It was super nice, like I had found a little home.”

Now 17 and into the final months of her senior year in high school, Neuberger is not only a busy member of NFTY at Temple Sinai, she is the regional president of NFTY-SAR, the Southern Area Region of the organization. It has chapters in six states from northern Florida through Georgia and into Tennessee.

Creating success stories like Neuberger’s has increasingly become the goal of those who work with Jewish young people. For synagogue professionals like Marisa Kaiser, director of the Center for Learning & Engagement at Temple Sinai, there are important changes occurring to make Jewish teens feel welcome in the Reform movement.

“We have to shift our way of thinking,” she said. “We have to make this instead of being about the institution, how do we make it about the teen? How do we meet them where they’re at?”

Last year, in addition to her responsibilities at NFTY, Neuberger was given a seat on the Temple Sinai Board of Directors. There, she has been welcomed as more than a fresh young face. She’s seen as an important decision-maker as well.

During the last year, she has helped the congregation carry out an ambitious capital campaign that comfortably exceeded its goal and raised $14.3 million. She was also part of a fundraising initiative by teens that raised $12,000 for NFTY’s Camp Jenny. The camp provides a free residential camping experience over the Memorial Day holiday for inner city youngsters.

As part of the synagogue’s recent extensive remodeling and facelift, Neuberger also helped plan new facilities for the synagogue youth programs, including a dedicated kitchen for young people.

Kaiser, who will become the president of the Association of Reform Jewish Educators in January 2021, presented Neuberger’s story at this year’s Biennial convention of the Union for Reform Judaism in Chicago. It was part of over a half dozen programs that discussed how to boost participation among teens after their b’nai mitzvah.

Among the discussions was the meaning of an important new study about the young people of Generation Z, born between 1995 and 2015. The extensive study by The Jewish Education Project sampled the attitudes of over 17,000 young people involved in 14 Jewish youth organizations, including NFTY.

Prominently mentioned in the conclusion was that teens who were involved in Jewish youth organizations were much more likely to remain connected to their identity as Jews and to Jewish life.

For the Reform movement, which has struggled in recent years with declines in membership and revenue, securing the future through teen participation has become increasingly critical.

The president of the URJ, Rabbi Rick Jacobs, made youth programs an important priority in his keynote speech at the Biennial last month in Chicago.

Neuberger, who hopes to attend Georgia Tech in the fall and to eventually become a doctor, is not sure of how her Jewish identity will develop once she begins college. Nevertheless, she says she’ll look back, with affection, on these past several years, knowing that her synagogue experiences will always be an important part of her life.

“Whatever I do, or wherever I go,” she said, “it will always be so nice to have Temple Sinai to come home to.”