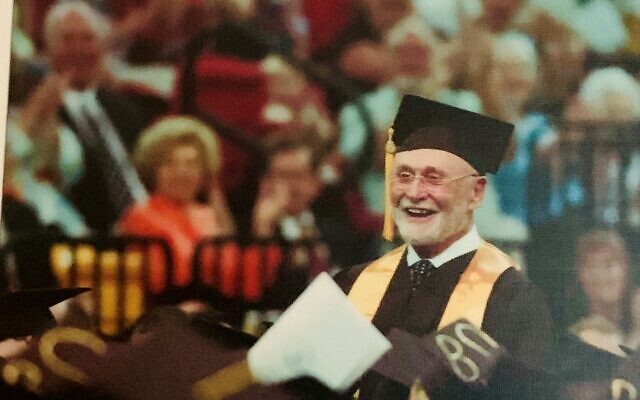 Arthur Frank Harris, loving husband and father, died Dec. 1, 2019. He first saw the love of his life when he was 16, in 1942, in winter, in the Bronx. Arthur thought Sydell Dienner was the cutest thing he had ever seen. He promptly “washed her face in the snow,” as Sydell recalls. They wed after World War II and were together for the next 70 years.

Arthur, born June 13, 1926, was the third child of Celia Frank and David Harris. The Harrises — Yvonne, Jerome, Arthur, and their parents — lived in the Bronx. There, Arthur found schoolwork to be easy. He graduated from high school at 16, but he chose to interrupt his studies at City College in Manhattan to volunteer as a radio operator for the U.S. Navy during World War II.

After the war, Arthur served in the Merchant Marine and wooed Sydell. The couple married in the Bronx in May 1949 and later lived in several different boroughs of New York City. Sydell and Arthur’s first child, Richard, arrived in 1952. Karen followed in 1956.

The family relocated to West Orange, N.J., in 1959. Arthur rose in his career as a sales executive for the next decade. In 1969, the Harrises moved south to Atlanta. Together, Sydell and Arthur entered the entrepreneurial world with a skin care company. In 1982, all four of the Harrises brought into being the successful and well-known first-generation family business Spa Sydell.

On May 18, 2019, Sydell and Arthur celebrated 70 blissful years of wedded life. They were joined by several dozen friends and family members, and Arthur’s written appreciation of Sydell and account of how they fell in love was read aloud.

Arthur is survived by his son, Richard; daughter, Karen; son-in-law, Bruce; and by his wife, Sydell.