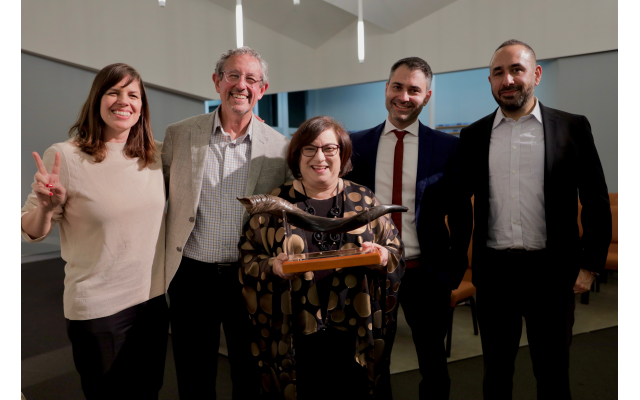 The New Israel Fund honored Atlanta residents Shai and Judy Robkin Dec. 8 with the Tzedek Award for their work with the organization.

NIF director Mickey Gitzin came to Atlanta from Israel to praise the Robkins and speak about the work of the organization at Congregation Or Hadash. The Robkins are dual Israeli citizens who work to raise money for NIF and educate Jews in Atlanta about relevant issues. They travel to their apartment in Jerusalem every year and try to visit NIF-affiliated organizations each time.

NIF, which is known for funding organizations in Israel that promote democracy and civil society, is proud of achievements on the ground they can attribute to their work.

“Israeli civil society is strong. We succeeded in that,” Gitzin told the AJT. “There are many organizations; people are doing amazing work on the ground. On the other side we did not feel that Israel’s democracy was as strong as we would expect it to be.”

The organization developed a new strategy; rather than targeting specific issues, they decided on focus areas to work on consistently over a longer period of time. This tactic has shown measurable results, Gitzin said, comparing the increase in public housing after NIF funding as well as growing Jewish-Arab collaboration.

“I think that one of the most amazing things we saw in the last year was a massive demonstration in the heart of Tel Aviv of Jewish women and Palestinian citizens of Israel, Arab women, demonstrating together against women’s violence. I think a lot of the advancement in this field has to be attributed to organizations we support,” Gitzin said. He also mentioned organizations they fund advocating increased investment in Arab communities within Israel.

NIF has a unique ability to react quickly to current events, which is a benefit to supporting the organization, Shai Robkin said. “We know the people there and we know the thoughtfulness that they’re giving, and they can react on the ground to whatever’s happening.”

He cited an NIF coalition called Tag Meir, which responds to what are known as “price tag” attacks, or violence against Palestinians by radical Israeli activists. 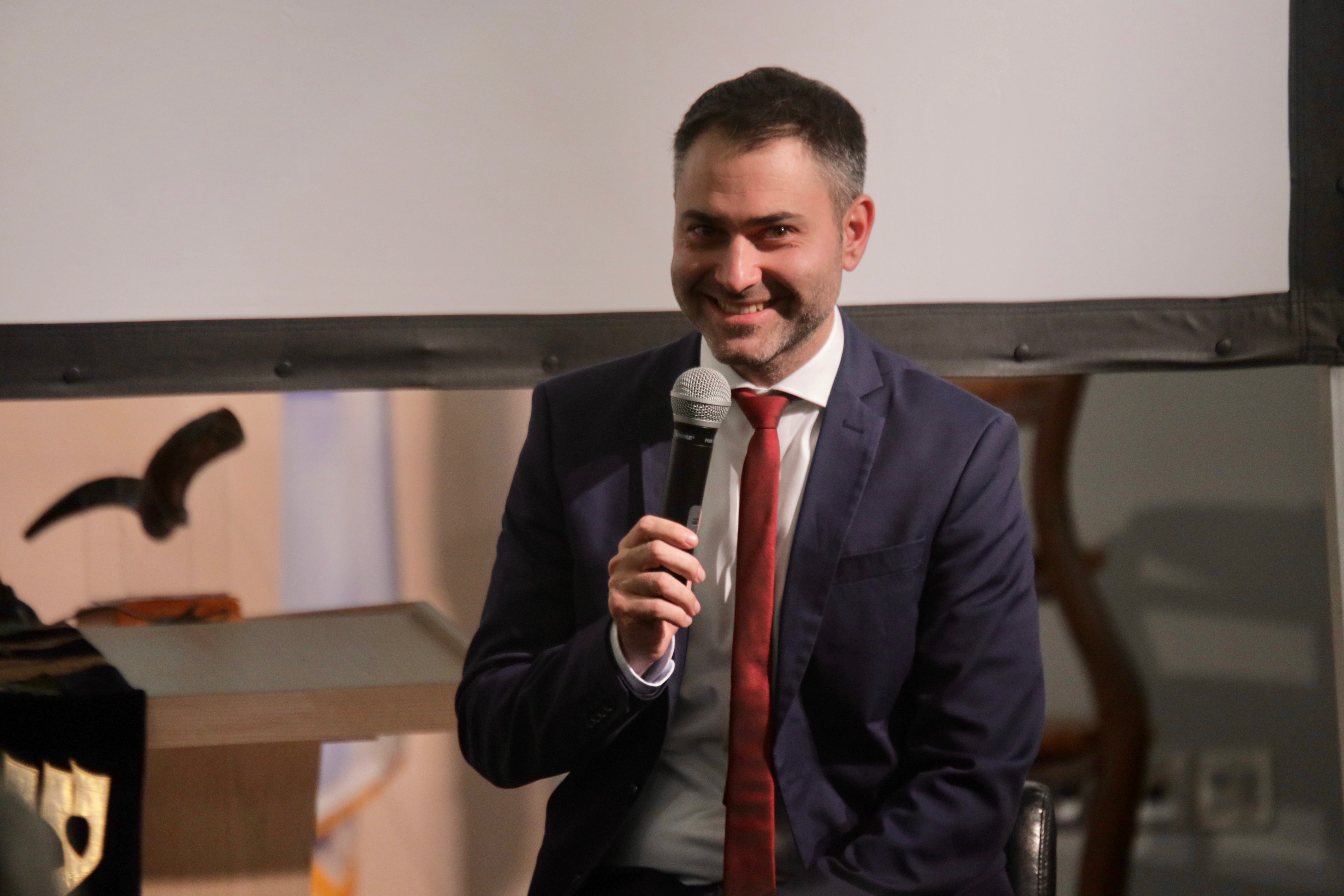 Director Mickey Gitzin speaks about the work of NIF.

Gitzin said, “Tag Meir was the humane response to price tag attacks on Christians, Muslims, wherever they are, often within Israel and the settlements. The idea is that every place that a price tag event occurred, they’re going to go there and show a different face of the Jewish tradition and the Jewish people.

“Many of them are coming from diverse backgrounds of Jewish identity. If there is violence they will come with flowers. If there is a horrible action, there will be demonstrations and speaking on behalf of peace. In a broader sense it reduced a lot of tension that was created because of these price tag attacks.”

The NIF is misunderstood, said Judy Robkin, explaining that the goal of the organization is to invest heavily in a healthy Israeli democracy, not to boycott it.

NIF has also been in the public eye after being singled out and attacked by Prime Minister Benjamin Netanyahu last year. “And what happened was just remarkable,” Gitzin told the crowd at Or Hadash. “In five days NIF had raised more than 1.2 million shekels from Israelis who wanted to show support. … I think there is a level of respect for us standing for our values.” The number of Israeli donations has increased every year, and every fourth donation is now from an Israeli, Gitzin said. 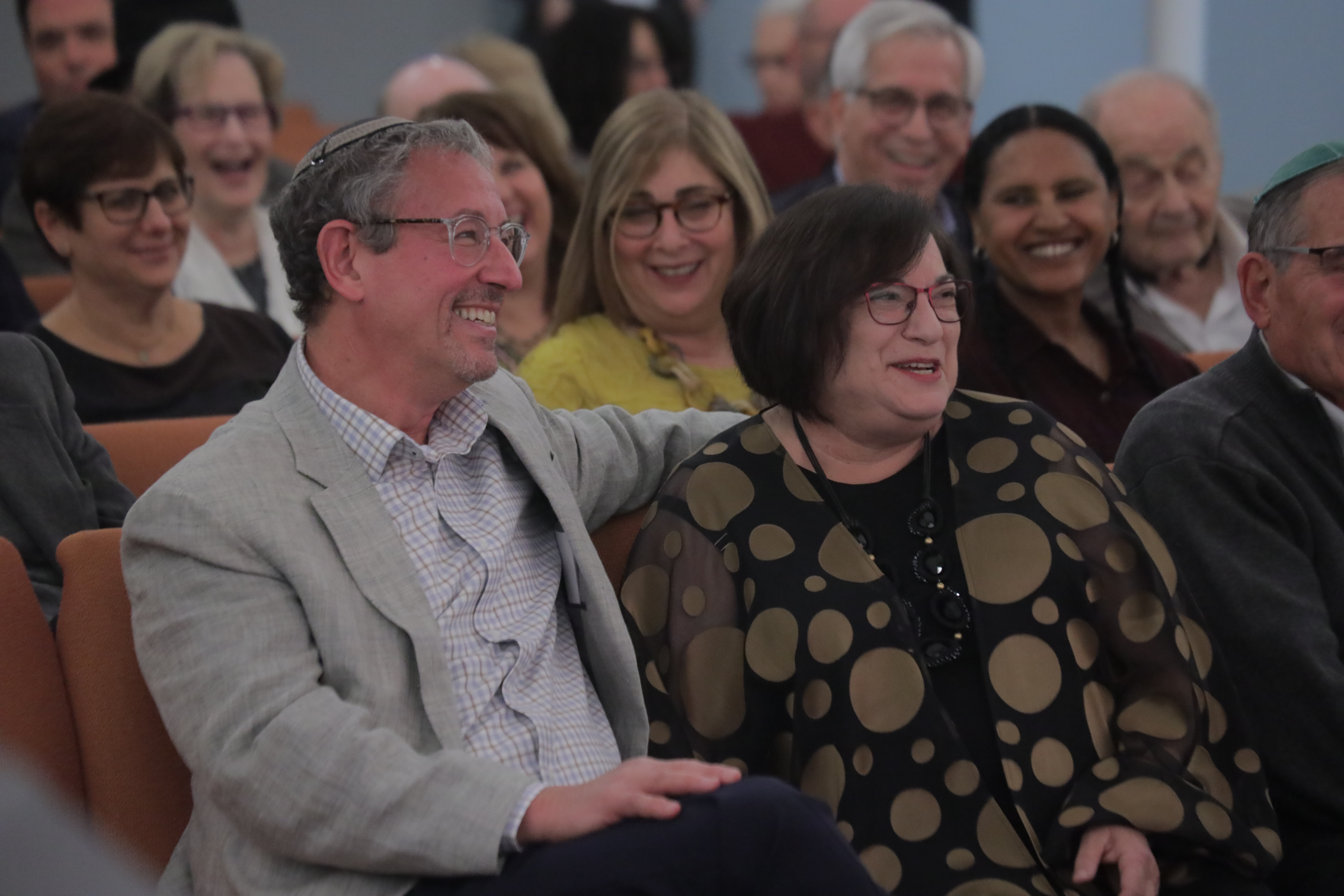 Photos by Ori Salzberg // Shai and Judy Robkin listen to speakers at Or Hadash.

Those the AJT interviewed voiced their concerns about what they see as a rise in right wing populism around the world, including in Israel, and how that threatens civil society. “We can’t ignore the elephant in the room. Americans have become aware in the course of the last three years of things Israelis were aware of for a long time,” Shai Robkin said. “Which is, quite frankly, how precious democracy is and how fragile it is. And I don’t have any hesitation. The parallels between what we see coming out of the prime minister of Israel and the president of the United States, they’re spooky in the sense that they’re so closely aligned.”

America’s political environment has brought with it a new type of interest in the work of NIF, said Libby Lenkinski, NIF’s vice president for public engagement. Growing alliances between various sectors of Israeli society is a priority, she said.

“They’re important for bringing forward whatever the issue is, but also because the populist narrative is all about division and fear of ‘the other.’ So when people can come together and defy the kind of going assumption about what this population will and won’t do, it’s really, really powerful.”