As Jewish Atlanta gears up for the second annual Atlanta Jewish Life Festival, so too does the Georgia Aquarium, behind new chairman Steve Koonin.

“What’s got me the most exited is that it’s the number one ticketed attraction in the state and that its been the catalyst for growth in downtown Atlanta on the Westside,” he said of the aquarium. “Truly, it’s been an economic boon for the city.

Among those developments since it opened are the relocated World of Coca-Cola, the Chick-fil-A College Football Hall of Fame, the Center for Civil and Human Rights and Skyview Atlanta Ferris Wheel.

Koonin is also CEO of the Atlanta Hawks, a role he has held since 2014, and represents both the team and State Farm Arena — including its recent renovation. His career spans some of the most iconic landmarks of Atlanta, including Turner Entertainment Networks and The Coca-Cola Company. He also sits on the boards of the Fox Theatre, GameStop, Rubicon Global and is an executive committee member of the Atlanta Chamber of Commerce.

Stepping into the role in December following the departure of Mike Leven, Koonin has been on the board practically since the aquarium’s earliest days in 2005. 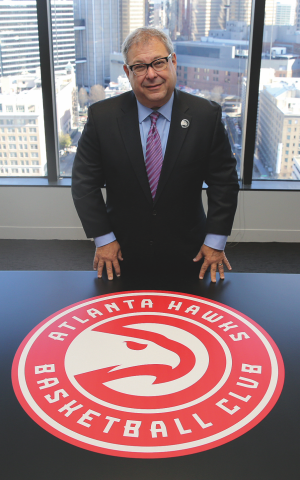 His role as CEO of the Hawks is one of Koonin’s many responsibilities. Most recently, he’s taken on the Georgia Aquarium’s top role.

“Mike and Bernie [Marcus] are the two prior chairmen, so it is certainly a daunting task to try to keep their enterprise going, but I feel very good about the opportunity,” Koonin said. “I very much want to help preserve and grow the incredible gift Bernie Marcus gave our city.”

Marcus was very complimentary of both of his successors.

“The aquarium has been under Mike Leven’s leadership through some really wonderful years both in terms of growth and in terms of making it the key attraction in the state of Georgia,” Marcus said. “Mike hoped when he retired that he would find someone as effective, if not more effective than he was.”

As of the end of 2019, the aquarium celebrated a number of milestones in the decade, including developments in animal medicine, science, and even an Animal Planet series “The Aquarium.”

Also in that decade were three new exhibits, “Dolphin Coast,” “Sea Lion SunTrust Pier 225,” and the seabird exhibit. Its largest ever expansion is still in the works and is expected to open in November with a focus on the role sharks play, beyond the fear they’ve inspired through film and TV portrayals.

Asked about the Jewish history of the aquarium, including himself and his predecessors, Koonin said, “I’ve never thought about it in those terms, but it was certainly present even in the initial design.”

Marcus himself celebrated his 90th birthday at the aquarium in June of 2019 — where $117 million was raised, surpassing the $90 million goal in honor of the birthday — which Leven emceed.

Koonin discussed Marcus’ vision and the role it played in defining the Jewish connection to the aquarium.

“It was very important to Bernie that there was the ability for kosher catering, and that’s not always easy for a big venue,” Koonin said. “It has and will always be a home for the Jewish community to come for meetings and celebrations just like the festival we’re getting ready to have.”

Speaking of the festival, Koonin was thrilled that the aquarium was the venue for the event and referenced current headlines, including recent anti-Semitic attacks in New York and New Jersey.

“I think now, more than ever, might be the very best time to get together and celebrate our community and continue to grow and reinforce the bonds within our community,” he said.

As the festival quickly approaches, he maintained his excitement for its second year.

“It’s great that the Jewish Times and Michael Morris have created an event that brings our community together to celebrate the good times, and I’m proud that we’re going to be hosting it,” he said.