An Israeli shot of earth with a sign saying “Small country, big dreams," taken by the Beresheet spacecraft

It was almost exactly nine years ago this month, in December of 2010, that Yonatan Weintraub, a young Israeli engineer, and two of his friends who were recent engineering graduates, decided that it was time for Israel to go to the moon.

The story of how Weintraub and his two friends ultimately helped create the successful launch of a space vehicle earlier this year and its crash landing on the moon three months later was the highlight of this year’s Jack Hirsch Memorial Breakfast Dec. 3 at The St. Regis Atlanta in Buckhead. This year’s honoree was Atlanta businessman Todd Starr.

The event, which is an important part of Jewish National Fund’s program in Atlanta, was among the largest in the history of the organization here.

Over 400 attendees heard Weintraub recount how Israel became only the fourth country in the world, after the United States, Russia and China, to make the trip to the lunar surface. 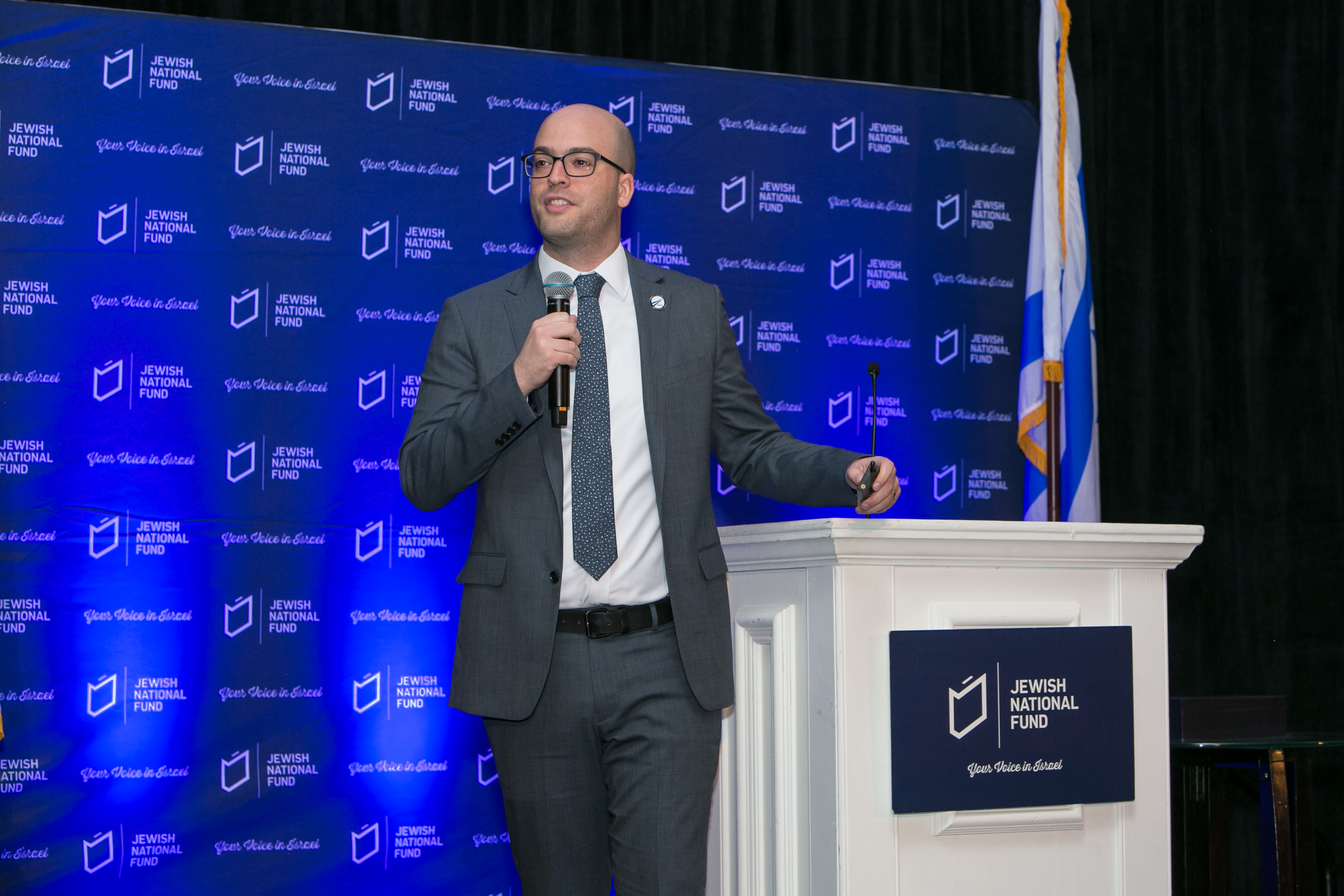 Initially the space effort was an attempt to win the Google Lunar XPRIZE competition. The contest offered a prize of $20 million for the first team to make a soft landing on the moon by the year 2015.

Although Israel’s moon rocket ultimately did not blast off until January of this year, the effort by Weintraub and his friends, with assistance from the government-owned Israel Aerospace Industries, helped to pioneer a set of new technologies.

The Israeli team brought the cost of the launch down to $100 million, which is, by far, the least expensive attempt at a moon shot. By comparison, America’s Apollo program of the 1960s and 1970s is said to have cost almost $700 billion in today’s dollars.

Weintraub believes that the success of the economical Israeli effort holds enormous potential for the future commercialization of space exploration.

“One hundred million dollars is a lot of money, but it’s within the budgets of universities and other research facilities,” he said. “As these costs come down, we will see a huge change in society. Just like the Wright brothers who showed that people could fly and helped to opened up what became an important part of the global economy, I think the same thing applies today for space exploration.”

A major goal of the Israeli lunar program was to stimulate an interest in science and space among Israel’s youngsters.

The relatively low cost for the mission was partially the result of economies that have been brought about by reusing rockets for the launch and by creating new ways to build a sophisticated lunar vehicle in a very small and light package, Weintraub said. The Israeli space vehicle was about the size of a small washing machine.

“This was the cheapest mission in space ever,” Weintraub pointed out. “We didn’t do what is called a dedicated launch, we did a launch on the reusable SpaceX rocket, which is owned by Elon Musk. It’s the Uber of space flights. And then there were new technologies in the manufacture of the parts. Our partner, IAI has commercialized the design and offered it to NASA for their own moon mission”

But it was not just the innovations in technology that motivated Weintraub, the Israeli government, and those who financially supported the effort, he said. All were hoping for what has been called the “Apollo effect.” That is, they were hoping for something similar to the enormous boost that scientific education in the United States is said to have received as a result of America’s space program. That, in turn, is generally credited with helping to fuel America’s subsequent global technological leadership.

Weintraub and the company he co-founded in Israel for the moon shot, SpaceIL, worked hard to create a program in Israel’s schools to inspire young people, he said. Over 200 volunteers were recruited to work with school-aged young people.

“I was interested in space ever since I was a kid. We wanted young people to think this is a cool thing,” he emphasized. “A big part of the mission was to get kids excited and interested in technology.”

The mission was also unique because almost all the money for it came from private donors. The space vehicle listed on a side panel the most important contributors: the Kahn Family Foundation named after an Israeli philanthropist who was born in South Africa, the Adelson Family Foundation of casino magnate Sheldon Adelson and his wife Miriam, and the Schusterman Family Foundation. Together they kicked in over $56 million.

Adelson has only one request for his giant-sized contribution. He asked that the words, “Am Yisroel Chai,” which means the Jewish nation lives, be written in Hebrew on one side of the lunar vehicle.