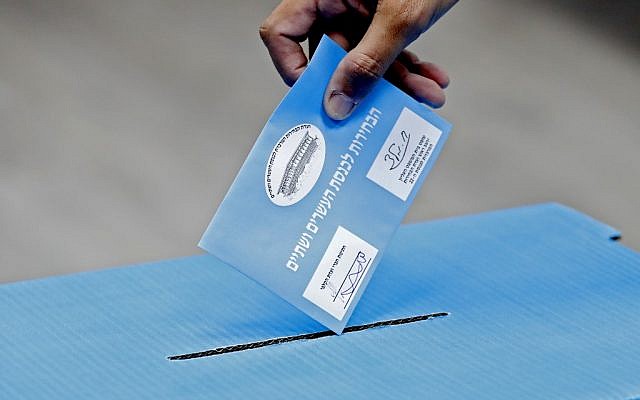 Some Israeli observers are calling the upcoming third election in less than one year an electoral version of “Groundhog Day.” The country appears trapped in a time warp, with voters expected to go to the polls again March 2, 2020, and all indications pointing to results similar to those after the last two elections in April and September.

No party has been able to cobble together a majority 61 seats to create a new government. This extraordinary stalemate has left the country with only a caretaker government, led by a caretaker prime minister, since December 2018. Yohanan Plesner, president of the Israel Democracy Institute, repeatedly used the word “unprecedented” in a telephone press briefing he held Dec. 11, the day the Israeli legislature, or Knesset, dissolved and set the next election date.

“This instability is nothing to be proud of,” he said. “Decision-making at the highest level is not functioning and the Knesset is essentially in a state of recess.” A November IDI survey showed that Israelis’ optimism about the future of the country’s democracy has declined.

Plesner blamed the current governmental crisis on “inherent weaknesses in the electoral system. The laws didn’t anticipate a situation like this.”

Still, Plesner suggested that Israeli democracy remains strong. He was referring to the fact that, for the first time ever, a sitting prime minister has been indicted. On Nov. 21, Prime Minister Benjamin Netanyahu was indicted in three separate cases and is charged with fraud, breach of trust and bribery.

Indeed, days after the new election date was set, the Israeli Supreme Court ruled that Netanyahu is not required to step down as prime minister. However, he is required to resign his other ministerial positions. Netanyahu said he would, by the end of the year. It is not clear yet whether someone under indictment can be asked to form a new government.

The court may need to rule on that question in the next couple of weeks. Likud party member Gideon Sa’ar has announced that he will run for the party leadership against Netanyahu in a primary set for Dec. 26. This is the first time in 14 years that Netanyahu has been challenged by anyone in his party. Polls indicate that Likud might fare better under Sa’ar in the national election, while still not succeeding in gathering enough support from other parties to coalesce into a functioning government.

Although it’s too soon to know exactly which parties will run in the March 2 election, already one right-wing party, the Zehut party that called for rebuilding of the Temple and legalizing marijuana, announced that it will sit this one out.

The first polls released immediately after the Knesset was dissolved and the next election date set showed the center Blue and White party gaining four seats for a record 37, with Likud dropping from 32 to 31 seats. The Joint List coalition of four mostly Arab parties would gain one seat while Avigdor Lieberman’s Yisrael Beyteinu would remain at eight seats. The ultra-Orthodox parties would lose one seat, as would the center-left parties.

Overall, the right-wing parties would seem to have less of a chance of accumulating enough seats to forge a coalition government than after the previous two elections. Combined, the left-wing parties could possibly reach a majority of 61 seats, but only if all Arab party members agree to support the government, and that’s unlikely.

Hence, the Groundhog Day effect. On March 3, 2020, the chance that Israel will have a sustainable, working government is about the same as it was on April 10 and September 18.