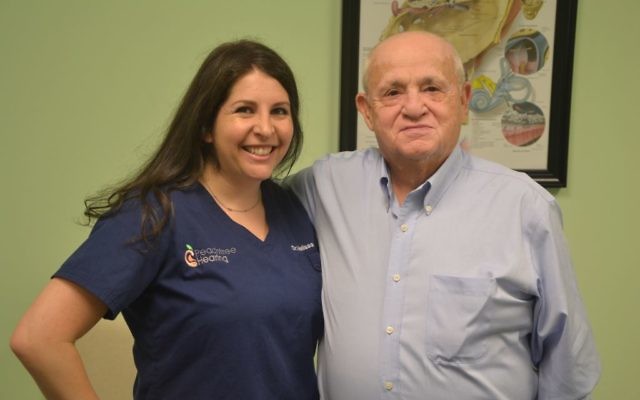 Peachtree Hearing audiologist Melissa Wikoff and Holocaust survivor Hershel Greenblat are all smiles after Greenblat gets his hearing aids.

Two years ago audiologist Melissa Wikoff of Peachtree Hearing in East Cobb heard about a hearing aid program for Holocaust survivors in Maryland in an alumni magazine for her undergraduate alma mater, the University of Maryland. She later approached Amy Neuman, the Holocaust Survivor Services program manager at JF&CS, to develop a similar program in Atlanta.

“I started this practice with the goal of doing good and making a difference,” Wikoff said. “So when I saw the article, I got connected with Amy, and she helped me find the survivors to help. Everyone that JF&CS sent me who qualified, I was able to get hearing aids for.”

Wikoff and Neuman secured a donation from Starkey hearing aids through the Starkey Hearing Foundation. The donation of 18 sets of hearing aids, plus lifetime care and services for the survivors from Peachtree Hearing, totaled more than $120,000 worth of technology and services.

The 18 Holocaust survivors who qualified for hearing aids were fitted in late August and early September. The entire process took Wikoff and Neuman around 16 months from start to finish.

One Holocaust survivor who received a set of hearing aids, Hershel Greenblat, has lived in metro Atlanta since 1950. He regularly speaks at schools, the Breman Museum and other locations about his survival as a child in Ukraine during the Holocaust. Before seeing Wikoff, he didn’t even know he had a hearing problem.

“I told Melissa that I was having trouble understanding words,” Greenblat said. “I could hear what people were saying; I just couldn’t understand. So she tested me and told me exactly what was wrong. It’s been fantastic since I’ve gotten these hearing aids. I can actually understand what people are saying to me.”

Greenblat, who now lives in Alpharetta, said he was excited to show off his new hearing aids to his family.

“The goal of the funds that we get is to help survivors to continue living independently because they’ve gone through a horrible trauma,” she said. “The research shows that people who have gone through a trauma are not likely to react well in an institutional setting. So we want to keep them out of nursing homes. All of our services are really aimed at keeping them living independently.”

Neuman estimated that 250 to 300 survivors live in metro Atlanta.

For Wikoff, who opened Peachtree Hearing a year ago, helping Holocaust survivors has been one of her proudest moments.

“This is the highlight of my whole career,” she said. “I thought opening a business was it for me, but it’s really to make a difference in my community and the Jewish community especially. I’ve been working on this for 16 months, but it’s come to fruition today, and it’s at a time when there’s lots of hate. I just want to show the world that Jews are doing good in the world, and we also don’t want to forget these survivors. They are here, and they deserve to have better lives.”