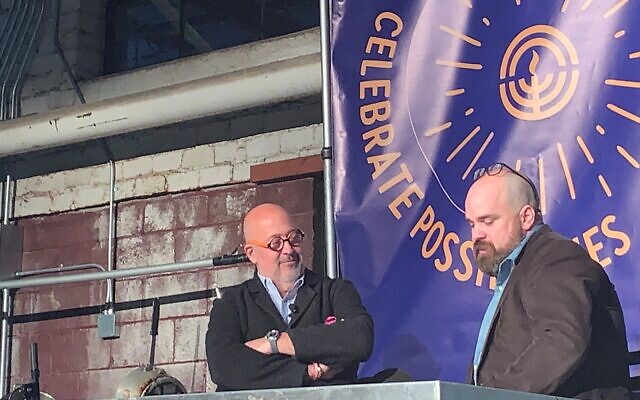 The Jewish Federation of Greater Atlanta’s event “Celebrate Possibilities” sparked a group of 400 with a charmingly outrageous and inspiring program, cornucopia of food, and sense of place Dec. 5 at The Works.

The event featured a jocular interview with local restaurateur Todd Ginsberg alongside James Beard Award-winning celebrity chef Andrew Zimmern. A confluence of sentimentality brought the Federation’s goals for community with the backdrop of Selig’s monumental redevelopment of the Upper Westside.

The evening was chaired by Beth and Joel Arogeti; Mara and Justin Berman; Sara and Robert Franco; Ally and Jonathan Habif; Linda and Steve Selig; Stacey and Stuart Shapiro; Mindy and David Shoulberg; and Michelle and Gary Simon. 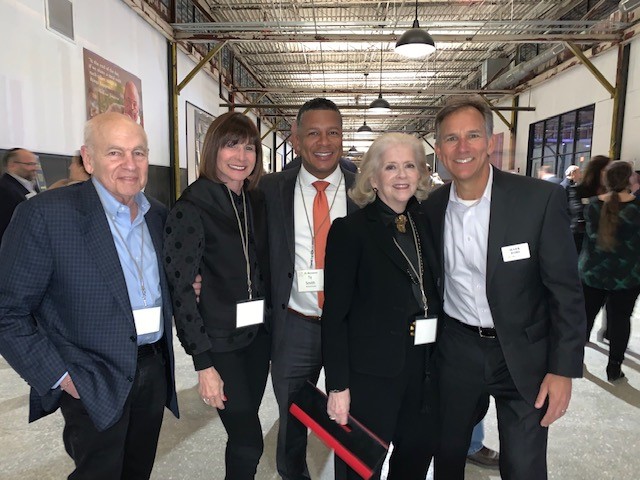 Not shy about sharing his thoughts, Zimmern is the host of Travel Channel’s “Bizarre Foods.” Parsed with off-color language, he talked about his Jewish grandmother, whom he loved dearly and who cooked in a tiny New York City kitchen. “I remember her playing canasta, watching the news, and serving anchovies on white bread … with her ample bosoms, which I fit under.” The audience could smell his description of her goulash, tongue, chicken and brisket, which ended up on her apron and was “never washed.” He said, “The schmaltz on the apron was like cologne to Jewish boys growing up. Maybe more like shellac. … I smell that now in food stalls in Japan or Hawaii. It represents caring, family and community.”

The bespectacled Zimmern engaged in an easy rapport with Ginsburg. The audience got a bit queasy with his hearty description of eating camel (including the hump for fat) and walrus “parts.” Sober for 29 years, Zimmern feels that his happiness is related to helping others. “We folks in this room are lucky, when you look around at the {world’s} conflict, hunger and trauma.” 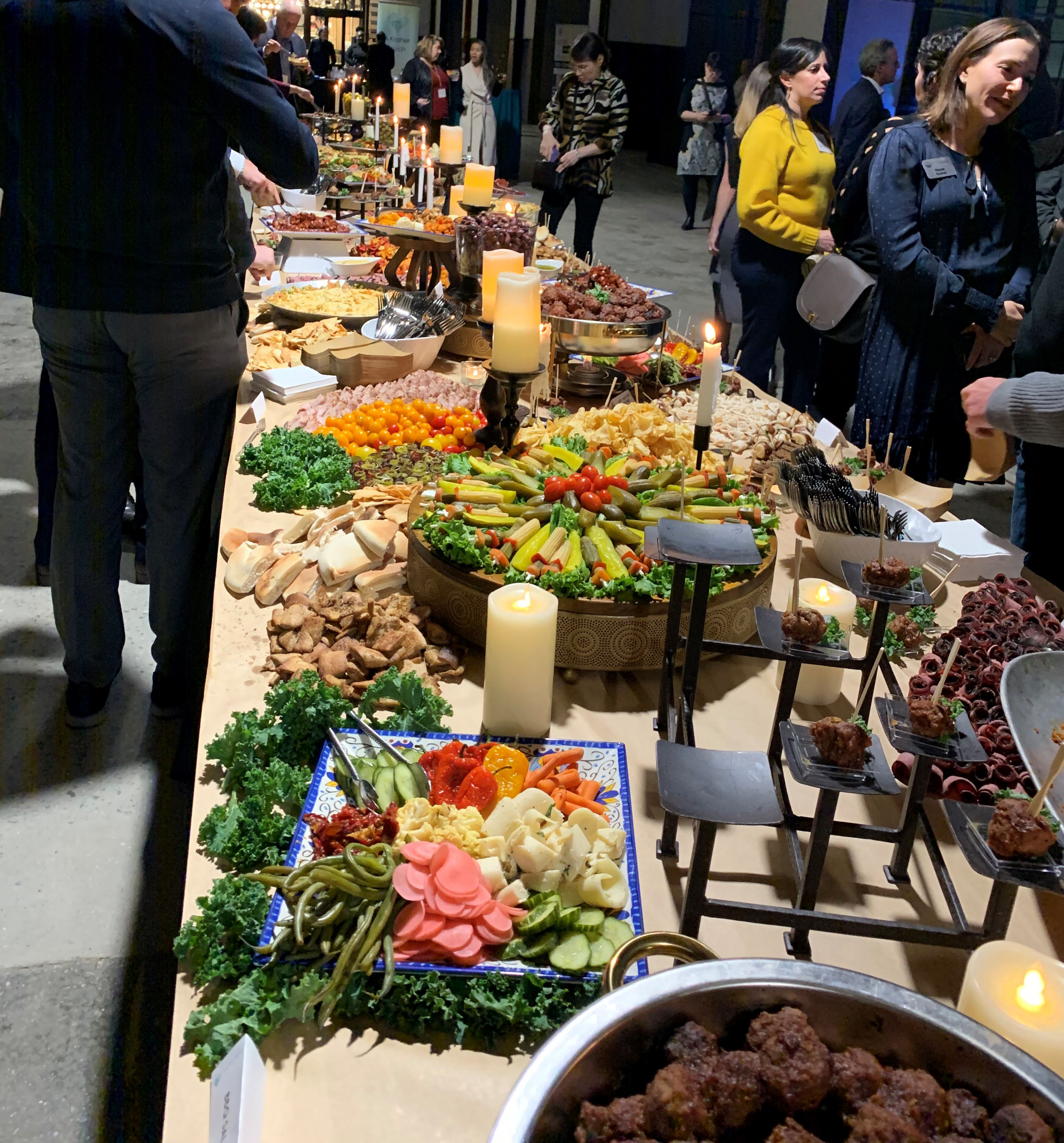 Federation CEO Eric Robbins spoke of the Federation’s important role of creating community, sharing examples of Atlantans who enjoy PJ Library and other events, such as Shabbat dinners, that fill an important role. One was a New Yorker who landed in Woodstock and saw the Federation as an oasis and connection to Jewish roots. Robbins touted the 2019 $19 million campaign success and stated that they were already halfway to the 2020 $20 million goal. “Federation is not abo

ut money, but about community.”

A Kosher Touch had the “magic touch.” Sandra Bank’s creativity shone. The 36-foot-long buffet table made it easy to duck in an out with no waiting or order. 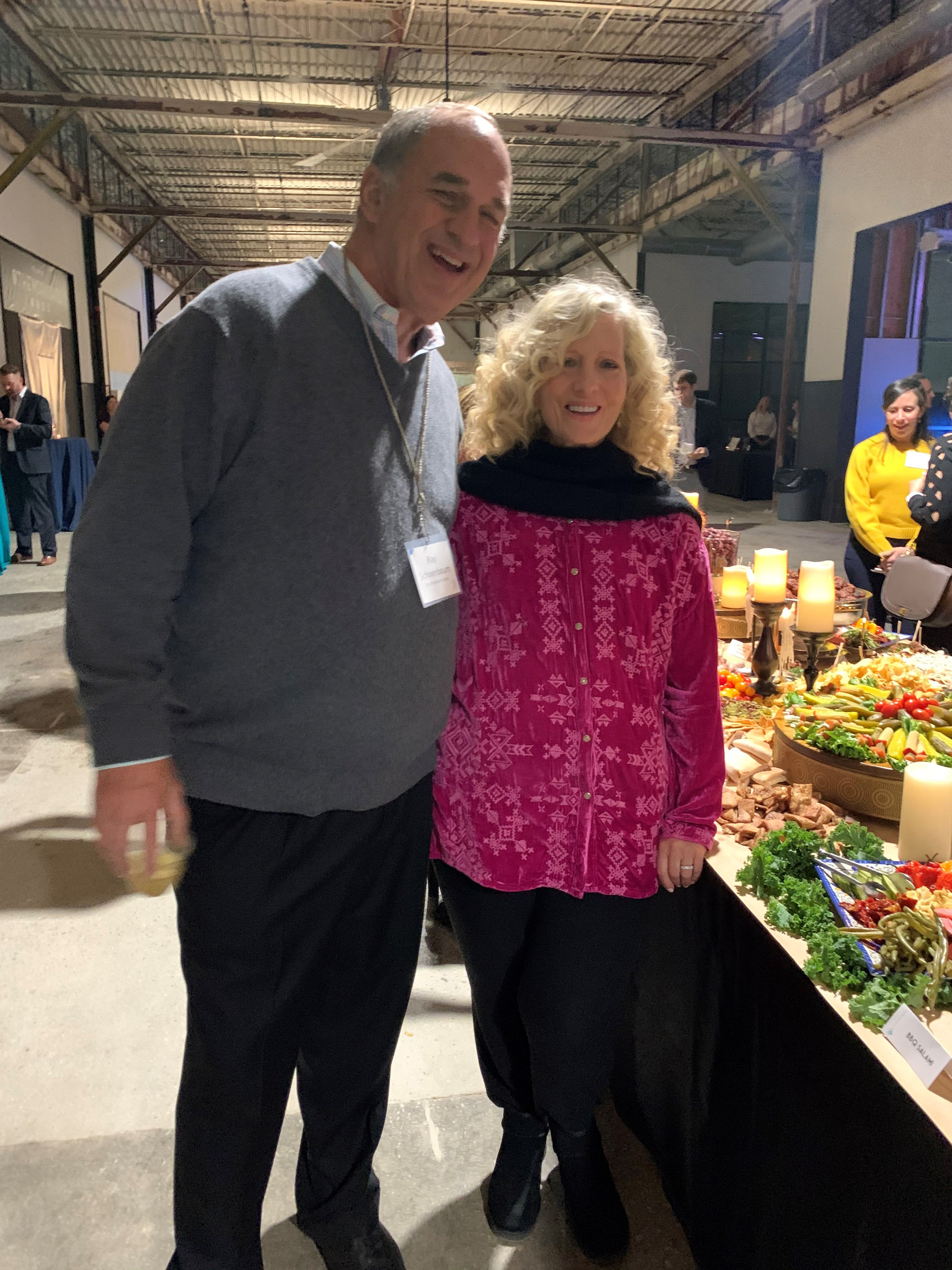 Anything that could be pickled, dried, chopped, wrapped, folded, spiced, dipped or marinated made its way to that behemoth of a table. “I’ve always been a little irritated that Christians have these elaborate charcuterie boards,” Bank said. “Why can’t we have a kosher version?”

Off to the room’s side were three huge vats of colorful paella. A man in line noted, “Look at this spread. See, the bars are empty because Jewish people know good food when we see it.” Full bodied hearts of palm, crudité, spicy meatballs, salami cucumber rolls and turkey pastrami were just a very few of the items artfully arranged. Segueing in and out of parts of the buffet could land seared tuna squares or vegetarian spring rolls in peanut sauce.

The old Makers Building at The Works is an 80-acre adaptive mixed-use development at 1295 Chattahoochee Avenue behind Ballard Designs. Phase One is under construction by Selig Enterprises. The boutique food market segment will accumulate international chef-driven fare, setting the stage for new concepts in cuisine. One of the evening’s co-chairs, Mindy Selig Shoulberg, vice president of Selig Enterprises, spoke lovingly of her late brother Scott. “His vision was to preserve the historic Upper Westside and create a new vibrant community and stay true to the buildings.”

Selig Enterprises has owned the one million square feet of industrial space of which The Works is a part for over 70 years. Expect hotel, resident, green and office space to follow.

Zimmern is partnering with Robert Montwaid, creator of New York’s Gansevoort Market, to curate and consult on the food interests in this space.