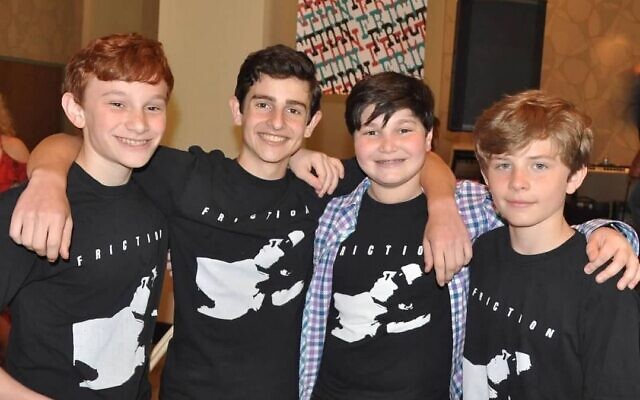 Friction has been together as a band since they were in sixth grade and 12 years old. Their average age is now 15.

A quartet of young musicians that made a big impression at last year’s Atlanta Jewish Life Festival is set to make a return appearance at the event this month.
They call themselves Friction, and the group, whose average age is 15, features Jackson Crim on lead guitar, Carson Wolff on bass, Sammy Effron on rhythm guitar and vocals, and Zach Friedman on drums.

Friction formed when its members were all students of The Davis Academy. Their music teacher, Robert Michek, was a fan of classic rock and taught the boys a bunch of songs that were popular decades before they were born. Their setlist is replete with material from the likes of Deep Purple, Cream, Otis Redding, The Beatles and Van Halen. The latter’s drummer, Alex Van Halen, is a favorite of Zach’s and one of his influences.

“These are classic songs,” said Zach’s mother Beth Friedman. “That’s why people our age love to listen to the band – it’s all our music.” Zach added, “My dad always played classic rock for me and my brothers when we were younger. He used to play in a band, so he had friends that were musicians and they would come over to our house and just play music.”

Friction received an award at the 2018 Atlanta Jewish Music Festival’s teen Battle of the Bands contest and plays numerous gigs around Atlanta, many of them for charity.

But things could have turned out very differently. On March 8, 2019, shortly after last year’s AJLF performance, Zach was severely injured in a road accident not far from his Sandy Springs home. “He was on foot, crossing High Point Road, when he was struck by an oncoming car going 30 miles per hour,” his mother recalled. She arrived on the scene to find her son “laying in the middle of the street and I think they were trying to get him on the stretcher. I didn’t know if he was going to die,” she said.

Zach suffered multiple fractures, a ruptured spleen, a punctured lung, and a brain bleed, and spent the next four days in an intensive care unit at Children’s Healthcare of Atlanta. “The outpouring from the community was unbelievable,” Friedman said. “The people at the hospital actually asked us if we were famous because they had never seen so many people come and visit. We had meals brought to us every night; people dropped off snacks so my other two boys had food to take to school. The community was amazing.”

She continued, “After he was released, he ended up going to my parents’ house because they have an elevator; he was in a wheelchair, so he was able to get up and down. He was out of school (and away from the band) for a few weeks. We didn’t know what was going to happen.” Although the family wasn’t sure he would be able to go to Israel, he did, and “ended up graduating and taking his finals and everything. It was a total miracle.”

Zach said he has no residual effects from the accident and is totally recovered. During his convalescence he received “a really nice message of encouragement” from Billy Joel’s drummer Liberty DeVitto, at the behest of Michek. 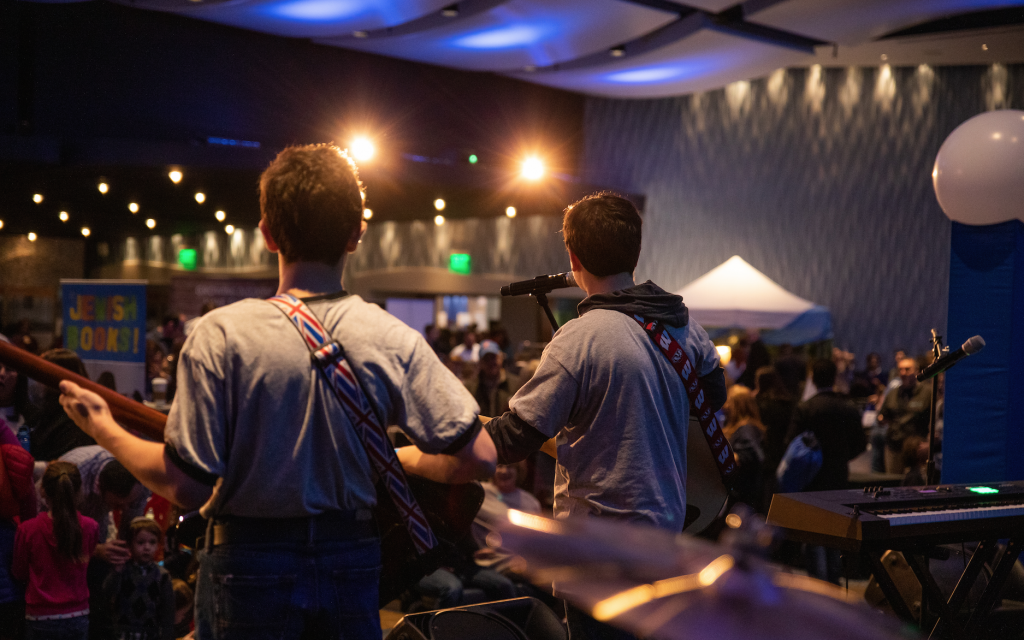 The band returns to the Atlanta Jewish Life Festival, where last year they received a great reception.

The band is back in action and gearing up for their upcoming shows. They practice every week and use Sandy Springs Music as a frequent rehearsal space, according to Friedman. David Szikman, the owner, “has been such a great supporter of these guys, and so helpful in helping them stay together as a band and learn new songs, and giving suggestions,” she said.

And Zach seems unstoppable. “I’m definitely going to continue doing this and having fun with it,” he said.