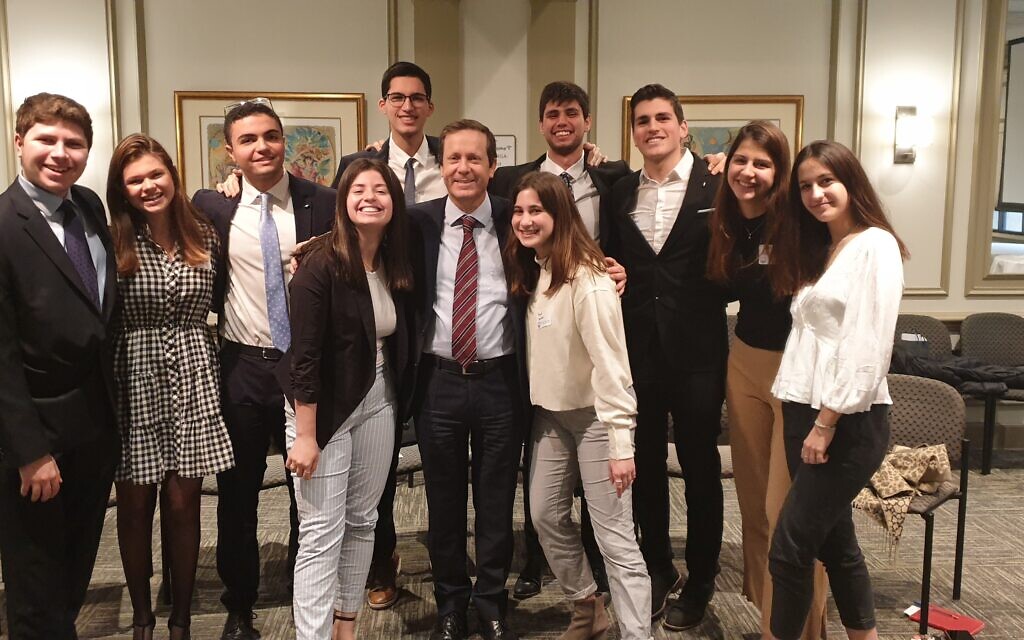 Meeting with Herzog are the 10 shinshinim, emissaries taking a gap year between high school and military service, posted in Atlanta.

In Israeli politics, Isaac “Bougie” Herzog is what’s known as a “prince,” a second-generation Israeli political leader. His father was Chaim Herzog, himself a soldier, lawyer, journalist and legislator, as well as Israel’s Ambassador to the United Nations and Israel’s president.

Had the political fates been kinder, “Bougie” (a childhood nickname) might have been prime minister. But, as he said, there are other ways to serve your country. In June 2018, he was elected chairman of the Jewish Agency for Israel, the 90-year-old non-governmental organization with a budget of more than $370 million to assist Jewish populations wherever they live.

Herzog came to Atlanta Dec. 9 for meetings at the Jewish Federation of Greater Atlanta with various segments of the community. He also spoke the day before to the Hillel International Global Assembly held here.

The Jewish Agency is a major recipient of funds allocated by the Federation, nearly $1.45 million for fiscal year 2020, which began July 1. That included $230,000 for the Shinshinim, a Jewish Agency program that this year sent Atlanta 10 young Israelis who are taking a gap year between high school and their military service, and working with schools, congregations and communal organizations.

Herzog met with the shinshinim and some of their host parents and representatives of organizations with whom the young Israelis are working.

Herzog said that the investment of Atlanta’s Jewish community in its Israeli sister towns of Yokneam and Megiddo has yielded “one of the most remarkable successes in Israel.”

The Federation allocated $20,000 to promote philanthropy in the region and $25,000 to help Yokneam’s emergence as a high-tech center. An additional $1.171 million from Atlanta Federation helps fund JAFI’s core programs, as well as community-building and education programs in Yokneam-Megiddo and Minsk, Belarus.

At a breakfast meeting, Herzog outlined three challenges facing the Jewish Agency: “a potential split” between Israel and the Jews living in North America, due, in part to ignorance about each other’s lives; anti-Semitic hate, whether from the left or the right; and the need to “produce content that enables people to be attracted to Jewish life.” The latter includes unaffiliated Jews or “indifferent millennials,” who might be attracted by the planned creation of a “Jewish peace corps.”

Where Israelis “take for granted that they’re Jewish” and make up three-quarters of their country’s population, American Jews are a minority of about 2 percent and must decide how they want to express their Judaism, Herzog said.
“The perception of life of my son in the paratroops may be very well different from your son in college, and that’s okay,” Herzog said. “These are different societies and different evolutionary modes.”

Another example, in Herzog’s view, is that while many American Jews voice about the issue of pluralistic prayer at the Western Wall, of greater interest to Israelis is that public buses now operate in Tel Aviv on Shabbat for the first time since the city’s founding in 1909. That is a “watershed development,” a major change in the religious status quo, he said.

Herzog believes the shinshinim can play a long-term role in bridging the gap between Israeli and American Jews. The shininshim, ages 18 to 19, bring with them a personal take on life in their homeland, and when they return to Israel a year later, take with them experience in the diversity of Jewish life in America.

This is Atlanta’s third year hosting shinshinim, a selective opportunity in which one applicant is accepted for every 12 who apply. In a decade’s time, they will be part of Israel’s young leadership, better acquainted with Jewish life in America than previous generations, Herzog said. He engaged in a separate give-and-take session with the shinshinim, their host families, and representatives of organizations that benefit through their interaction with the young Israelis.

Herzog also met for discussion with members of Atlanta’s rabbinic community.
For all of the differences between the Jewish populations, “When Pittsburgh happened the hearts of Israelis stopped instantaneously,” Herzog said, referencing the Oct. 27, 2018, massacre of 11 Sabbath worshippers at the Tree of Life synagogue in Pittsburgh.

Herzog noted the presence at the breakfast of Israel’s Consul General to the Southeast, Ambassador Anat Sultan-Dadon (whose father also was an Israeli ambassador), adding that they had discussed recent anti-Semitic vandalism at the University of Georgia.

Elsewhere in the world, Herzog said that political and economic instability has placed the Jewish community in Venezuela at “high risk;” cautioned that a Labour victory in Britain’s Dec. 12 parliamentary elections could prompt increased Jewish emigration to Israel; and noted that terrorists failed in their assault of a synagogue in Halle, Germany, because of security barriers funded through a Jewish Agency program initiated by his predecessor, Natan Sharansky.

As leader of Israel’s Labor party and the Zionist Union coalition, Herzog fell short of unseating Prime Minister Benjamin Netanyahu’s Likud-led coalition in the 2015 elections. Addressing Israel’s current political turmoil, Herzog said that, barring a “miracle,” he expects a third round of parliamentary elections in March 2020, after voting in April and September failed to yield a governing majority in the 120-seat Knesset.

Herzog’s term as chairman of the Jewish Agency lasts four years. While “it’s very difficult for me” to be on the sidelines of Israeli politics, “I’m really passionate about what I do. [The Jewish Agency] fills my life, it gives me a huge purpose,” he said.