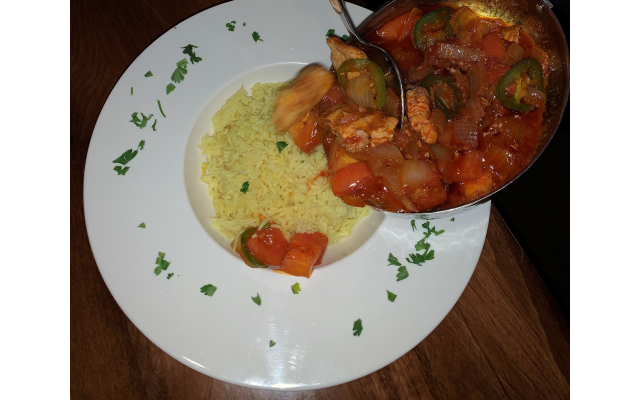 A winning entree was the Sagla’s Spris ($20) salmon over rice in a well-balanced berbere sauce with tomatoes, garlic and onions. Enough for second-day leftovers.

A geography lesson will tell us about the succession of Eritrea from Ethiopia in 1993.

This east African cuisine is known for its unique spices, seasoned protein, savory vegetables, full bodied stews, and injera, a traditional dark spongy bread served alongside for dipping and scooping. Year old Feedel Bistro on Briarcliff Road, just off Clairmont Road, is owned by brother-sister team Simon and Tamar Telahun, who had previously run a Mediterranean restaurant in the same location. Tamar, who also was the restaurant’s interior designer, said, “Our mother served good food all the time and showed us that it should never be boring.”

Tamar, who is tall and sleek, hailed from Addis Ababa at age 14 and speaks several languages. She shares that her given name is biblical, meaning “sweet fruit, tall like a palm tree and so high up as to be close to G-d.” She continued, “I have a passion for food and love that customers come in to experience our culture. Food, like art and music, crosses over and connects us.” Tamar showed us the extensive Eritrean alphabet wall chart (thus the name “Feedel” for alphabet) which reads left to right and makes Hebrew look easy.

Although Feedel is not kosher, there is an ample selection of vegan and vegetarian choices and a delicious salmon. Ethiopian food is also known for not using animal fats.

We started with a raw collard greens and cabbage salad ($11.99) which served three people and was chopped with onions, tomatoes and jalapeños. The citrus dressing was clean and carried a bite.

The bowl’s rim presentation was laced with chopped herbs. There is also a Feedel’s salad with tuna, lettuce, tomatoes and jalapeños.

Next we had a striking rainbow row of eight vegan samplers and injera bread for sharing. ($14). Taking special attention to distinguish the orange from the shades of green and brown, we narrowed it down to: azifah (whole brown lentils), cabbage, collard greens, yellow split peas, ye’shimbra asa (chickpea biscuits) and siljo (fermented legume). Some hot, some cold, but definitely colorful.

The table favorite was the hot dished collards and cabbage. The four lentils were grouped together and had a similar texture and garlic flavor. Interestingly, the latter was even better the next day as leftovers.

The best entree was Sagla’s Spris, a choice of proteins. The salmon was $20 and had a side choice of injera, pasta or rice. Because we were “old fuddy duddies,” we asked for silverware after sopping with the injera on the appetizers. The red sauce on the salmon was described as “well balanced with berbere,” onions, garlic and tomatoes served with a small square of timatim, chopped tomato salad, or house salad. Plenty to share or take home for a second meal. The salmon was prepared just perfectly and came with a $3 upcharge option for adding collards. While there were no authentic African desserts, we thought the tiramisu looked mighty fine.

Next time, I’d opt for the Ingudai Mushroom Tibs ($13.99), choice of mild, medium or spicy; and you guessed it, “onions, tomatoes, and jalapeños.” Another inviting vegan entrée is Shiro ($12.75), powdered dried legumes, chickpeas and traditional spices cooked with onions and spices and served with a side salad. The injera teff bread is porous and skeletal at the same time. A fermented sourdough flatbread, Feedel serves it neatly folded over like a camping sleeping bag on top of an exercise mat.

A note about culture. Nine languages are spoken in Eritrea, in the Horn of Africa, including Italian because Ethiopians had to defeat Italy twice to remain independent. Asmara is the largest city and the coastline hugs the Red Sea. It is a dictatorship and a country where freedom of the press is not valued.

To the south is the more well known Ethiopia, which, like Eritrea, has a large Muslim population.

Like Tamar said, “Cross over and learn about another culture.” Feedel Bistro is a good place to continue or start.