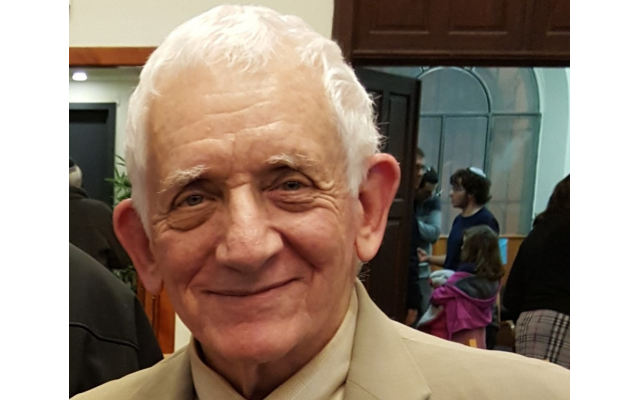 Sunday and Monday in Jerusalem, we were blessed with rain, sometimes heavy, sometimes a little less so. There was also a waterspout – thunder, lightning – sadly a bolt hit a young man; he survived. Until we made aliyah in 1977, we had never lived in a community that was not blessed with an abundance of rain.

In Fort Sill, Okla., from 1965 to 1967, there was not a lot of rain, but we had an unusual snow fall. It came on Tu B’Shevat when we were planting symbolic trees for that holiday. The trees were real, the snow was real, the two trees had a good start – one has survived since 1966.

Since my Meuhedet (HMO) doctor is at the office on Rehov Beit Hadfus, I went there to pick up my prescriptions for the next three months. I was able to buy drugs for this month at the pharmacy nearby. Since I had my shopping cart with me, even though it was raining, I walked over to Rami Levy. I bought a minimum number of items because I wanted to return to my diur mugan (assisted living) in Nahlaot. The rain had begun to fall heavily, but I walked to the street to find a cab. None would stop; some had passengers, but I stood there determined, unable to take out my umbrella and open it. As you can imagine, I was getting wet and wetter because I did not have a coat with a hood.

Then the angel appeared. A young Orthodox woman, with a small hat on her head and dressed in a light purple coat, came out of the parking lot, stood by me. She asked, “Are you waiting for a cab?” I said that I was. She asked, “Did you call for a cab?” I said that I had not. She handed me her light purple umbrella, closed up my shopping cart because I had left it open, went out on to the street and tried to hail a cab for me.

She would not give up; a few cabs passed. Finally, one stopped, she took my shopping cart over to the trunk, which had opened. She was about to pick up my basket when the driver came out to help.

I was overwhelmed. I returned her umbrella. I asked her if I could take her anywhere. She paused for a moment and waved me on. I sat in the cab as it moved through the heavy rain and the streets overflowing with water. Surely, I am old, but for a young woman to help me in the way she did lit up my day. Little by little the cab edged its way to Rupin Street, where it “floated” down the street with buildings rising, in particular my favorite the new national library finally getting its own home.

Then, I turned my thoughts to this young woman, an angel, who helped me. She just helped, not pausing for a moment. Since I have been worrying about having elections for an unprecedented third time and since I have been listening to the bile flung at each other by the politicians, this young woman showed what our society should be about –kindness to one another. Just before I left my apartment to run my errands, I had heard on the TV about the minimum monthly allotments for the elderly. I could not believe it; this is the Jewish state, and this is how we are treating the aged in their final years. I know the Holocaust victims who are penniless are being denied the funds given to Israel by the Claims Conference. The ministers have big cars; we hold unnecessary elections throwing away more money, but those in need are not given what they are due.

I cannot expect everyone to have their own “angel,” but having met one, I know they exist here. A few words come to my lips. We have such wonderful creative individuals who have changed the entire world with their inventions. I would like to ask them to invent for our nation something desperately needed. Let us drive our cars with a thought about all the drivers beside us. Let us volunteer at the hospitals; let us visit the elderly, sick and suffering. Let us educate our politicians, who are our elected representatives, to speak respectfully to each other. Let us educate our children to have respect for their teachers and appreciate the real value of their education for their futures.

Will it happen? My angel is going to help. If we try to take a step in the right direction, then success may not be so far away.

David Geffen is an Atlanta native and Conservative rabbi living in Jerusalem.